HomeNewsWhy did Virat Kohli get out lbw to Taijul Islam? What cues...

Why did Virat Kohli get out lbw to Taijul Islam? What cues did Dinesh Karthik pick in the past? 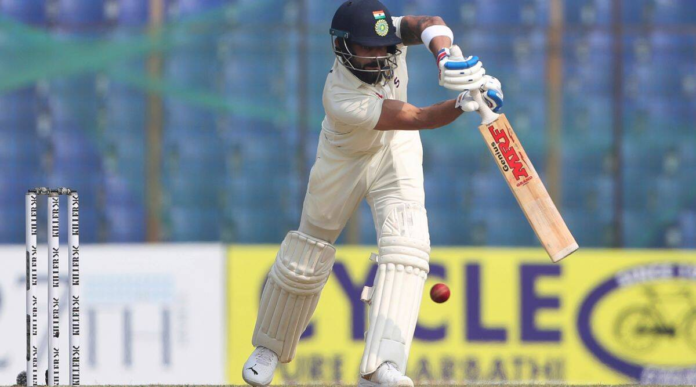 Kohli again got out lbw to a spinner. Read what Sunil Gavaskar once said about how to play spin

Virat Kohli stood there, staring at the spot where the ball that got him landed. As if he was trying to suss out why that piece of turf behaved differently from the rest of the square. He often does that. Many batsmen have had such mannerisms at dismissals. Sachin Tendulkar would squat really low when he was bowled to suggest the ball didn’t bounce as much as he anticipated. VVS Laxman’s eyes would open up like a sacrificial goat realising it was done and look pleadingly at the non-striker. Justin Langer would shake his head as if he was wronged even when the stumps lay flat behind him.

So, Kohli’s reaction is one thing; but the manner of his dismissal is a matter of concern. It was almost expected that this would happen in Bangladesh Tests; not just because of the surfeit of spinners on board but because of the recent past.

In 11 of his dismissals in India since 2020, spinners have got him 9 times; four times he has been trapped lbw. Twice in the Pink-ball Test this March against Sri Lanka, he was out lbw.

The ball at Chattogram turf landed on the leg and middle. Kohli went back but for some inexplicable reason morphed into the 1990’s batsmen from England who would be at sea on the dry subcontinental tracks. Like them, Kohli tried to turn the ball to the leg side, bat-face totally shut, and he froze as the ball turned past the bat to ping his back pad in front of the middle stump.

Watching him then was Dinesh Karthik who would analyse it later on Cricbuzz. “I’m pretty surprised as to where he is standing in the crease. He is standing touch outside leg stump. And that you do when you are little worried about LBW. But that in many ways actually causes you more trouble the moment you stand outside leg stump because almost all balls you need to meet across. But when you stand in the middle or between middle and leg stump, there is a good chance that the balls that are drifting into you say the middle stump then you end up playing a lot straighter.

“The moment you stand outside leg stump, everything you do tends to go across and so the one that comes in has the potential to get you lbw. So that is one thing that I have been very surprised with the strategy he has used to play spin.

“Kohli over the years has consistently stood at middle or between middle and leg and that allows him to play with softer hands. And this mindset has come obviously because players who do not want to get lbw do that. And he wants to avoid that. Interestingly, in both the innings he got out lbw. Yes the ball kept a little low in the first innings but in the second innings I guess it was a touch and was a kind of delivery you play on it. The place Kohli stood on the crease is a hard place to bat on especially on these kinds of tracks,” Karthik said.

At Chattogram, against Bangladesh, Kohli was at a similar ‘hard’ place. And opened out further with the left leg outside the crease. The lbw, as DK says, seems to be on his mind. And just as Karthik said then, Kohli was forced to go across, tackling the ball away from the body. Sometimes, it has the resultant effect of making the bat-face shut early in the process, instead of pushing it straighter.

Despite his expression, it wouldn’t have been surprising that a ball turned just a bit from there. It was not a huge break; it just spun from leg and middle on to the middle stump – and yet his bat face was totally shut towards the leg side.

Sunil Gavaskar once held court to this newspaper about how to play spin. It was in particular reference to a devilish turning track of Bangalore 1987 – his last Test where he hit a masterful 97 against Pakistan. But the basics of that do hold.

“You only drove the deliveries on the middle- and leg-stump line. You didn’t want to drive him (left-arm spinner Iqbal Qasim) through covers as the bat-face would turn and you would be slicing the ball to slip. You want to play him with as much of a full bat-face as possible to negotiate any turn, and drive the ones on which you could reach the pitch of the ball.”

Incidentally that day in Bangalore on a crumbler against Qasim and Tauseef Ahmed, the off-spinner, Gavaskar had taken the leg-stump guard. But once you take that position, he said that conscious effort has to be made not to play across the line.

Gavaskar also dwelt on the back-foot play against spinners. “Everyone is on the forward-press movement these days. It’s not easy to work the backfoot from there. You just tend to transfer the weight back which does not get you in the right position to play. Back Foot means you are actively pressing back, gaining time and distance to manoeuvre the ball by creating your own length. Not just standing back. To play the cut shot, you have to actually use the depth of the crease.”

Why doesn’t Kohli go down the track?

Like many modern-day Indian batsmen, Kohli hardly goes down the track. He prefers to try using the depth of the crease behind. India coach Rahul Dravid could do both, and was particularly masterful in pressing right back to create his own length and time. But had Dravid gone back to this ball from Taijul Islam, he would have looked to punch/defend it towards mid-off. Not try turning to the leg side.

But why are the batsmen loathe to go down the track these days? Gavaskar has the answer.

“You need the confidence to go down the pitch. Pujara does it the most. In Australia, against Nathan Lyon, he took an off-stump guard and went down the track; that way he was confident that even if he missed, it would invariably hit him outside the line of the off-stump and avoid LBW. Also, it makes the bowler think, ‘Is he going to come down now’ and he might drop short. Rohit does it as he has a natural instinct to look for that opportunity to get the big shot going.

Most batsmen around the world just stand there at the crease and hit the ball into the stands with the modern-day bats. On turners, that’s not going to work. Unless you get close to the ball – either on attack or defence – you are going to get in trouble by staying in the crease. Look at the dismissals in this Test – most of them have been stuck at the crease. More than a lack of technique, it’s a lack of confidence,” Gavaskar said then.

It will be mighty interesting to see what changes Kohli adopts in the next innings. If he continues with the leg-stump guard, would he be more careful to play straighter? Or would he alter his stance to middle or middle-and-leg?

Share
Facebook
Twitter
Pinterest
WhatsApp
Previous article
France’s Kylian Mbappe is not the fastest on the field at the World Cup
Next article
Ishan Kishan’s double ton has put Shikhar Dhawan in a fix: Dinesh Karthik