HomeNewsWhatsApp’s new accidental delete feature can save you from embarrassment

WhatsApp’s new accidental delete feature can save you from embarrassment 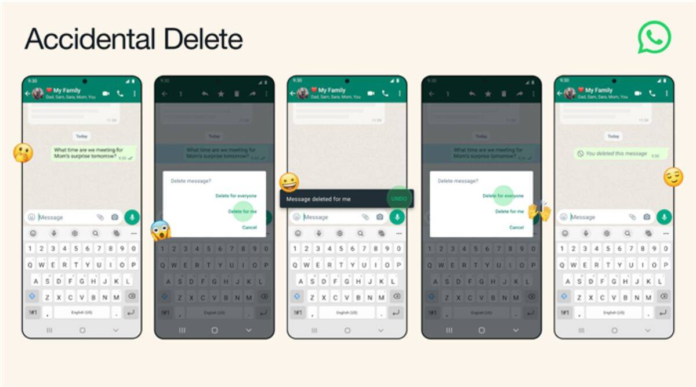 WhatsApp’s new accidental delete feature will come in handy if you accidentally use “delete for me” on a message.

Imagine this situation—you accidentally sent a message to the wrong group or the wrong person. In a hurry to delete the message, you accidentally hit the “delete for me” option instead of the “delete for everyone” option. Now, you can neither see or delete the embarrassing message you sent but it is visible to the other people in the chat you sent it to. WhatsApp has released a new “accidental delete” feature to get you out of a tricky situation exactly like this.

The new feature gives you a five-second window from the time you deleted a message to undo the deletion. After you delete a message, a small dialog box will appear with the message “Message deleted for me.” The dialog box will also have a small “Undo” button. If you click on the button, the message you just deleted will reappear.

On December 14, WhatsApp announced that it has begun testing picture-in-picture support for video calls on iOS. Apple devices trail far behind Android devices with this feature since Android has been supporting it for quite a while now. Currently, the picture-in-picture feature for iOS is currently only available to WhatsApp beta users and a wider release will only follow next year.

Earlier this month, WhatsApp Pay’s India chief Vinay Choletti quit the firm just four months after he joined the role. Choletti had taken charge of WhatsApp Pay in India after Manesh Mahatme departed the company in September to join Amazon.