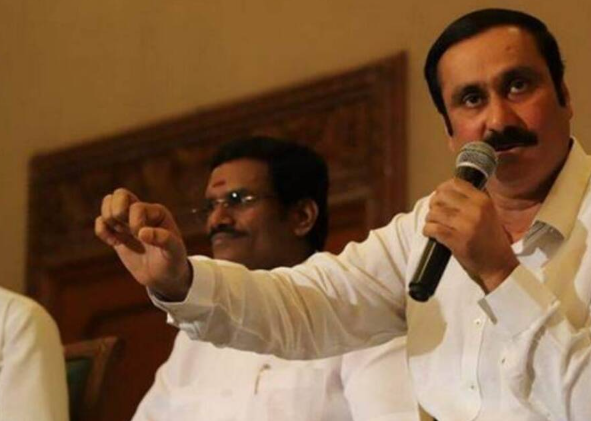 Palaniswami’s lieutenants take umbrage at Ramadoss’s comments on AIADMK being “split”, even as talks of PMK exploring options with the DMK emerge

Firmly ensconced as the leader of the AIADMK since replacing O Panneerselvam via voting at a party general council meeting last year, Edappadi K. Palaniswami should have had it easy as Tamil Nadu Leader of Opposition (LoP), especially with AIADMK’s usually hawkish NDA alliance partner the BJP mostly remaining on his side or neutral over the party’s internal strife in recent months. However, Pattali Makkal Katchi (PMK), a key NDA ally that claims sizable OBC-Vanniyar community votes in the state, now appears to have him in their crosshairs. A war of words began when PMK leader Anbumani Ramadoss made disparaging comments on the AIADMK’s internal crisis, amid rumours about their efforts to join the DMK alliance.

Ramadoss made the comments at a recent party meeting, where he told his leaders that the AIADMK has split into four groups, led by Palaniswami, O Panneerselvam, TTV Dhinakaran, and V K Sasikala, adding that this provided the PMK an opportunity for growth in the state. After his remarks were publicised by party attendees in the media, leaders of the AIADMK took offence and reminded the PMK that the only reason their party could find a foothold in mainstream politics was because of the munificence of the late AIADMK supremo J Jayalalithaa, who gave them space in her alliance.

AIADMK organising secretary D Jayakumar rhetorically asked PMK who had gave them an “address” and “helped them climb ladders”, and said that people shouldn’t “kick the ladder they had used to climb (up)”.

He was talking about the long relationship PMK had had with the AIADMK, through Lok Sabha elections of 1998, 2009 and 2019, as well as in the 2001 and 2021 assembly elections. Moreover, even though PMK was part of an alliance, it had run on its own in the rural local body elections of nine districts in 2021.

Jayakumar said that Jayalalithaa was the one who brought the PMK into the AIADMK coalition and helped them win four Lok Sabha seats. “We gave them 27 assembly seats in 2001, and PMK won 20,” Jayakumar said. He also said that Ramadoss, who was Union health minister in the UPA 1, should worry about his own party instead of badmouthing the AIADMK.

Responding to Jayakumar’s comments, K Baalu, a senior PMK leader and party spokesperson, said, “Is it not true that the AIADMK is split up? Today, even a child knows that the AIADMK is split.” He added that the PMK should get credit for Palaniswami staying on as the Chief Minister after the 2019 byelections, even though the ruling party had a small majority at the time. He was referring to how PMK votes played a crucial role in the AIADMK winning nine seats, even though it lost 13 seats to the DMK.

AIADMK and PMK leaders believe the ongoing war of words won’t cause a crisis in the alliance. “We had to reply to them, but that doesn’t mean the alliance will fall apart. PMK can’t find a place in the DMK alliance as long as Thol Thirumavalan’s Viduthalai Chiruthaigal Katchi (VCK) is in the DMK alliance,” said a senior AIADMK leader. VCK is a Dalit and Tamil nationalist party that is locally at loggerheads with PMK.

A senior PMK leader said his party could easily leave the AIADMK-led NDA alliance in the state and run on its own in the 2024 General Elections. “That might be the best way to prepare for the 2026 assembly elections,” he said. Even though Anbumani would prefer the idea, the leader said, his father S Ramadoss, the PMK founder, wouldn’t prefer such adventurous, unconventional moves in politics.