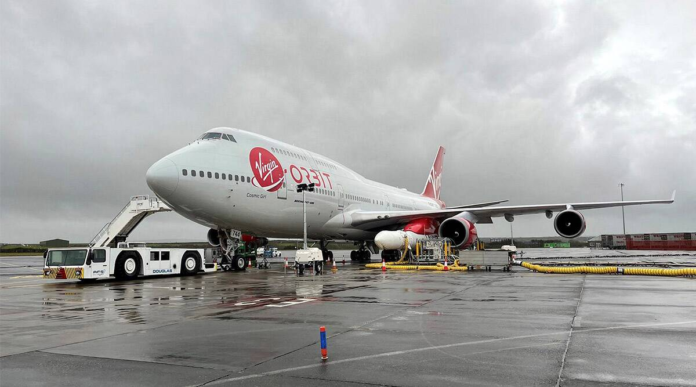 Virgin Orbit, part-owned by billionaire Richard Branson who founded the Virgin Atlantic airline, plans to use a modified Boeing 747 with a rocket attached under its wing.

The first orbital satellite to set off for space from western Europe will be launched from Cornwall in southwest England on Monday, Virgin Orbit said. The company, part-owned by billionaire Richard Branson who founded the Virgin Atlantic airline, plans to use a modified Boeing 747 with a rocket attached under its wing.

Once the plane is in flight, the rocket will be released over the Atlantic Ocean, taking small satellites from seven customers into orbit in space, in what is known as a horizontal launch.

The mission has been given a window for take-off from 2216 GMT on Monday but that is dependent on the weather plus other scheduling and system issues, and Virgin Orbit said there are back-up dates in mid and late January.

A successful rehearsal for the launch was held on Thursday, the company said in its statement.

Britain has a large space industry employing 47,000 people who build more satellites than anywhere outside the United States, but those satellites have had to travel to spaceports in the U.S., French Guiana or Kazakhstan before they can make it into orbit.

Having the facilities to launch satellites into orbit from Britain will boost the economy by 3.8 billion pounds ($4.5 billion) over the next decade, the government estimates.

The spaceport in Cornwall could be the first of several as Britain’s regulator, the CAA, is processing applications from other locations including one in the Shetland Islands, north of Scotland.

“I look forward to seeing more launches from other UK spaceports over the next year, putting us firmly on the map as Europe’s leading destination for commercial small satellite launch,” the UK Space Agency’s deputy chief executive Ian Annett said.

The Cornwall spaceport is located at a regional passenger airport in Newquay, which late last year was given approval as a spaceport after the regulator said it had met the appropriate safety, security and environmental requirements.

The mission to launch the satellites is called “Start Me Up”, named after a Rolling Stones song, and is a joint project which Virgin Orbit is undertaking with the UK Space Agency, Cornwall Council and Britain’s Royal Air Force.

“This launch is demonstrating that with the Virgin Orbit LauncherOne system an airport can become a spaceport that sends humankind’s innovations on their journey,” Virgin Orbit Chief Executive Dan Hart said in a statement on Friday.

Government and commercial customers are both using Start Me Up, which also includes a collaborative U.S.-British mission, Virgin Orbit said.