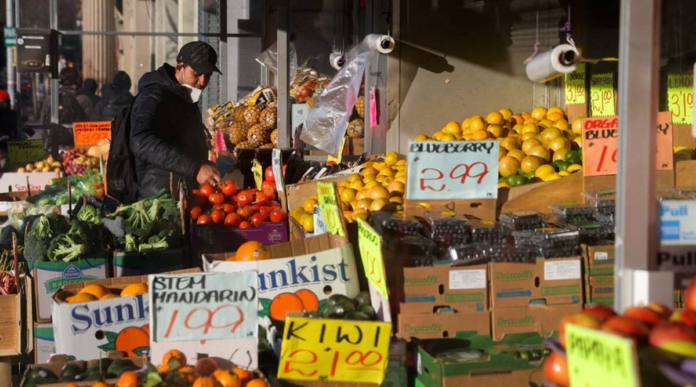 The consumer price index dipped 0.1% last month after gaining 0.1% in November, the Labor Department said on Thursday. That was the first decline in the CPI since May 2020.

US consumer prices unexpectedly fell for the first time in more than 2-1/2 years in December amid declining prices for gasoline and other goods, suggesting that inflation was now on a sustained downward trend.

The consumer price index dipped 0.1% last month after gaining 0.1% in November, the Labor Department said on Thursday. That was the first decline in the CPI since May 2020, when the economy was reeling from the first wave of Covid-19 infections.

Economists polled by Reuters had forecast the CPI unchanged.

In the 12 months through December, the CPI increased 6.5%. That was the smallest rise since October 2021 and followed a 7.1% advance in November. The annual CPI peaked at 9.1% in June, which was the biggest increase since November 1981. Inflation remains well above the Federal Reserve’s 2% target.

Price pressures are subsiding as the U.S. central bank’s fastest monetary policy tightening cycle since the 1980s dampens demand, and bottlenecks in the supply chains ease.

Gasoline prices fell 12.5% in December, according to data from the US Energy Information Administration.

Prices for used cars and trucks are also declining as the supply of motor vehicles improves. Ebbing demand has left retailers holding excess merchandise, forcing them to offer discounts for products like apparel and furniture.

The Fed last year raised its policy rate by 425 basis points from near zero to a 4.25%-4.50% range, the highest since late 2007. In December, it projected at least an additional 75 basis points of hikes in borrowing costs by the end of 2023.

Excluding the volatile food and energy components, the CPI climbed 0.3% last month after rising 0.2% in November. In the 12 months through December, the so-called core CPI increased 5.7% after advancing 6.0% in November.

The moderation in inflation will be welcomed by Fed officials, but they will probably want to see more compelling evidence of abating prices pressures before pausing rate hikes.

The labor market, which has remained tight, will be key in this regard. The unemployment rate is back at a five-decade low of 3.5%. There were 1.7 jobs for every unemployed person in November.

A separate report from the Labor Department on Thursday showed initial claims for state unemployment benefits fell 1,000 to a seasonally adjusted 205,000 for the week ended Jan. 7. Economists had forecast 215,000 claims for the latest week.

Part of the surprise drop in claims reflects challenges adjusting the data for seasonal fluctuations at the start of the year. Nevertheless, claims have remained low despite high profile layoffs in the technology industry as well as job cuts in interest rate-sensitive sectors like finance and housing.

Economists say companies are for now reluctant to send workers home after difficulties finding labor during the pandemic. They, however, expect claims to rise by the second half of the year as higher borrowing costs choke demand and push the economy into recession.

The claims report also showed the number of people receiving benefits after an initial week of aid, a proxy for hiring, dropped 63,000 to 1.634 million in the week ending Dec. 31.

The government reported last week the economy created 223,000 jobs in December, more than double the 100,000 that economists say the Fed wants to see to be confident inflation is cooling. A total of 4.5 million jobs were added in 2022.