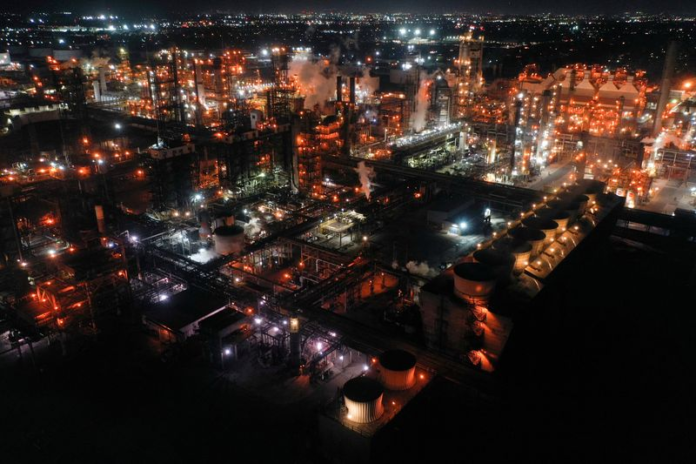 (Reuters) – U.S. oil refiner PBF Energy (NYSE:PBF) is closing out one of the best financial years in its history, a wild bounce back from the brink in April 2020 when fuel demand and gasoline prices cratered during the pandemic and the company’s value swooned lower than what it had just paid to buy a California refinery.

PBF’s stock fell by so much that at one point the company was valued at less than the $1 billion it paid for the refinery. Now, the refining company is basically debt-free, and year-to-date its share price has soared 400% even during a bear market on Wall Street.

While the coronavirus pandemic and Russia’s invasion of Ukraine upended worldwide energy markets, the biggest U.S. refiners have emerged stronger and leaner than before the outbreak. Whether they can repeat that performance in 2023 is another story.

The three largest U.S. oil refiners – Valero, Marathon Petroleum (NYSE:MPC) and Phillips 66 (NYSE:PSX) – sport lower debt levels, are bringing in more cash than they were three years ago, when fuel demand was at a peak, according to a Reuters analysis of their financial performance.

Marathon, and Valero’s market valuations reached record highs in 2022; while Phillips 66 and PBF’s are near highs reached in 2019.

When the pandemic hit, big U.S. refiners closed numerous facilities that were less profitable than other operations.

In the United States, five refineries, with a combined capacity of 801,000 bpd, permanently shut in 2020. Gasoline consumption fell by 1.3 million bpd that year. One more refinery in the U.S. would close in 2021, bringing total closures to six and closed capacity over 1 million barrels per day.

Global refining fell by about 3.3 million barrels of daily capacity since the start of 2020, according to industry estimates. Processing capacity is expected to increase by 1 million bpd per day in 2022 and 1.6 million bpd in 2023, mostly in Africa, Asia and the Middle East.

The decline in capacity boosted fuel costs for consumers, but it was a boon for U.S. refiners as profit margins for making diesel, gasoline and other products surged as economic activity rebounded.

U.S. refiners benefited from growing exports and a surge in European natural gas prices that gave U.S.-based refiners an advantage over their European counterparts, who cut runs to save on the higher cost of gas.

Gulf Coast gasoline margins skyrocketed to $40 a barrel from the 2017-2019 average of $11, while per-barrel margins for making diesel jumping to $55 from $13, according to energy consultancy Tudor Pickering Holt.

Fitch Ratings expects U.S. refiners’ margins to fall by 30% to 50% in 2023 and for profits to decline due to slowed worldwide economic activity, higher inventories and the addition of global refining capacity.

Refiners now have $12.6 billion more in working capital in the first three months to 2022 than in the same period in 2019, before the onset of the coronavirus pandemic.

Fitch noted that the companies are using profits to pad their cash balances, “presumably to preserve liquidity ahead of a likely decline in cash flows towards normalized levels,” it said in November.

U.S. refiners are not likely to restart idled facilities, however, and continue to shut plans that cannot make chemicals and plastics, which are considered a better investment for coming years.

Earlier this year, Phillips 66 laid off nearly all of its 450 employees at a shuttered oil refinery in Louisiana as it converted the hurricane-damaged plant to a products terminal.

The one exception would be the opening of Exxon (NYSE:XOM) Beaumont’s crude unit but Lyondell plans to shut its 263,776-barrel-per-day Houston plant by the end of 2023.