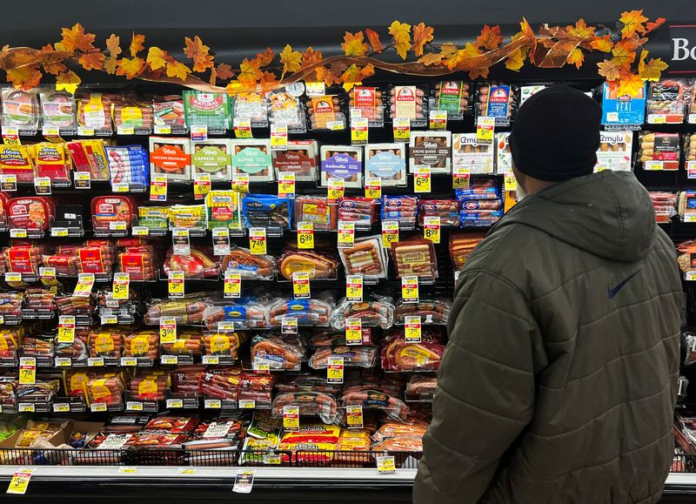 (Reuters) – Shares of U.S. grocers, packaged food companies and supermarkets were lagging in the first three weeks of 2023, in a sharp contrast to last year, as their high valuations and unattractive dividend appeal pushed investors to U.S. Treasuries.

The S&P 500 consumer staple sector, along with other bond proxies including real estate and utilities, outperformed the broader market in 2022 amid recession fears, as investors sought shelter in dividend-paying companies.

In a reversal of the trend, consumer staples sector has shed 3.4% in 2023, the most among the major S&P sectors, while the S&P 500 has climbed 1.5% on easing bets of a severe economic downturn.

“Fundamentally, investors are starting to recognize the valuation of staples as a whole, which trade at a 25% premium to historical averages,” said David Wagner, portfolio manager at Aptus Capital Advisors LLC.

“You couple this with the fact that there are other yield alternatives now relative to the yield-rich sector of staples.”

Rising interest rates have lured investors towards robust payouts in U.S. government bonds for the first time in nearly a decade.

The U.S. 10-year Treasury yield stands at 3.4%, while the consumer staples sector is offering a dividend yield of 2.7%, according to Refinitiv data.

Consumer companies, which witnessed soaring demand for groceries and cleaning supplies during the peak of the pandemic, are now battling a triple whammy of low sales volumes, high input costs and a stronger dollar, as evidenced by results from Procter & Gamble (NYSE:PG) Co on Thursday.

The bellwether for consumer products companies warned of profit pressures due to high commodity prices, as well as inflation-weary shoppers cutting back.

Quarterly reports from Coca-Cola (NYSE:KO) Co, PepsiCo (NASDAQ:PEP) Inc, Colgate Palmolive Co, Kimberly-Clark Corp (NYSE:KMB), Kellogg (NYSE:K) Co and Hershey Co (NYSE:HSY) in the coming weeks will shed more light on the health of the sector and set the tone for its performance during the year.

Investors have also piled into rate-sensitive tech and growth stocks, which were clobbered in 2022.

“Large and small tech which were obliterated in 2022 could certainly be a bright spot in 2023 as they were way, way oversold,” said Jake Dollarhide, chief executive officer of Longbow Asset Management in Tulsa, Oklahoma.