“This Is Karnataka, Your Politics Won’t Work Here”: HD Kumaraswamy to Amit Shah 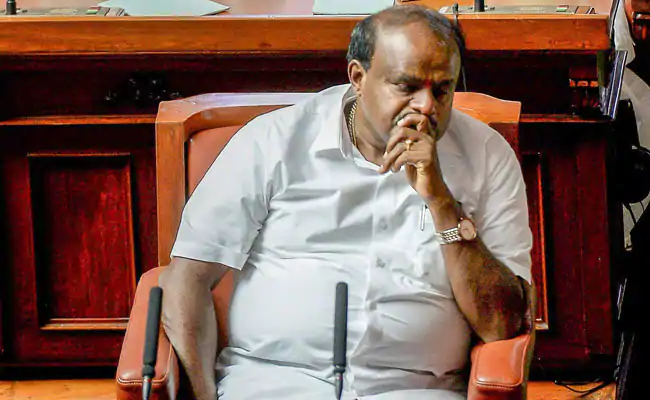 HD Kumaraswamy’s retort comes after Mr Shah’s comments against the regional party calling it an ‘ATM of a family’ and claiming that voting for it will be like casting the ballot for the Congress.

JD(S) leader HD Kumaraswamy on Monday hit back at Union Home Minister Amit Shah by stating that his style of politics will not work in Karnataka.

The former chief minister’s retort comes after Mr Shah’s comments against the regional party calling it an ‘ATM of a family’ and claiming that voting for it will be like casting the ballot for the Congress.

Regarding the upcoming assembly polls, he said the second list of the party candidates for the election is expected after Sankranti, which falls on January 15. The party has already announced a first list of 93 candidates.

“He (Shah) has said (BJP will have) no alliance with anyone. Who had gone to their doorstep? Did we go seeking an understanding? I’m building my party with an aim to cross 120 seats (in 224 member assembly). I’m working 20 hours a day. I have not gone to the doorstep of Congress or BJP with an application,” Mr Kumaraswamy said.

Speaking to reporters here, he pointing out that “during 2018 assembly polls, Congress claimed that voting for JD(S) means voting for BJP calling us its ‘B team’.” “Now, the BJP’s Amit Shah is calling the JD(S) the ‘B team’ of Congress and is saying that voting for us will be like voting for Congress. This shows the fear about JD(S),” the former chief minister said.

Mr Kumaraswamy accused BJP of having planned to lure strong winnable candidates of other parties in the constituencies where the saffron party is weak. “This is Operation Lotus ahead of the polls.” Urging party workers to ensure that BJP forms a government with two-thirds majority in Karnataka, Shah on Saturday had asserted that his party will go alone in the assembly polls, and had said it will be a direct contest as voting for JD(S) is like casting the ballot for Congress.

Noting that JD(S) has taken a pledge to keep BJP out of Karnataka, Mr Kumaraswamy claimed that Prime Minister Narendra Modi had asked him to form a coalition government with BJP, when he was already heading an alliance government with the Congress after 2018 assembly polls.

“This is Karnataka, your politics will not work here… I had not gone to anyone’s door, both Congress and BJP had come to my door seeking for alliance…your party (BJP) people are talking that they may have to join hands with JD(S), not me,” he said.

Accusing the JD(S) of spreading rumours claiming that BJP will join hands with them, Shah had said that his party will not go with any party and will fight assembly polls alone and form the government on its own.

Hitting back at Shah for calling JD(S) as the ‘ATM of one family’, Mr Kumaraswamy asked him to show one incident of his family looting the state and its treasury.

The former chief minister asked “what morality the BJP has which is looting the state with corruption to accuse JD(S).” “What morality you have to speak about Deve Gowda (former PM and JDS supremo) and take his name. JD(S) is the ATM of Kannadigas, Karnataka and its farmers,” he further said.