HomeNewsEconomyTake Five: Keeping the lights on

Take Five: Keeping the lights on 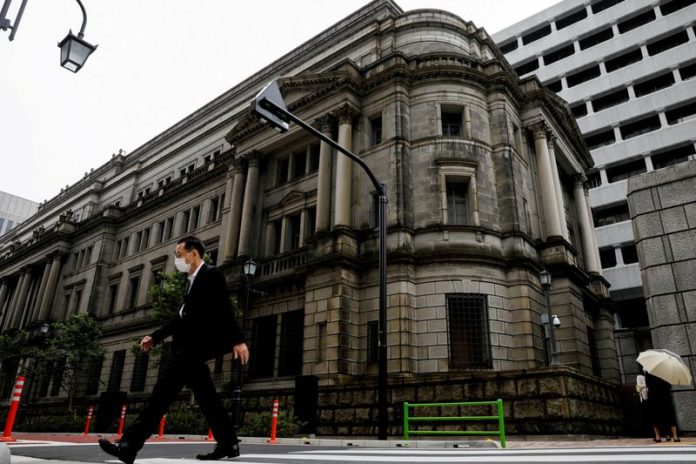 (Reuters) -The Bank of Japan will be the last of the major central banks to hold a policy meeting this year, and policy-makers in emerging economies also mark the year-end with rates decisions.

The state of the U.S. housing market is in focus, while in Europe unusually cold weather has raised concerns of electricity outages and renewed anxiety about energy costs.

As the markets ponder the top trades for 2023, here’s a look at the week ahead in markets from Kevin Buckland in Tokyo, Lewis Krauskopf in New York, and Dhara Ranasinghe, Naomi Rovnick and Karin Strohecker in London.

Even the uber-dovish Bank of Japan has not been spared from investors trying to pick central bank pivot points.

A shock acceleration in Tokyo consumer prices to the fastest pace in 40 years has emboldened some to short Japanese government bonds ahead of Tuesday’s policy decision. Speculation was heightened by rare hints from policy board members that it might be time to review ultra-easy stimulus settings.

But BOJ watchers say a shift will not happen until Governor Haruhiko Kuroda steps down in April after a decade at the helm. There’s good reason to take it slow: the recovery is fragile and inflation, while high, is nowhere near European and U.S. levels.

And nationwide CPI data will only be due after the policy decision – made public on Friday.

2/IT’S COLD OUT THERE

A cold snap in Europe raises the risk of electricity blackouts that could exacerbate pain inflicted by the energy shock and high inflation. It also tests Europe’s resolve to save energy and mitigate the economic impact of the Ukraine war.

Europe’s gas storage is almost 90% full after European Union governments acted to build reserves following disruption of Russian supplies, but a series of nuclear outages, especially in France, has added to nervousness of electricty outages.

France is striving to avert power cuts, and Germany is bleeding cash to keep the lights on.

Emmanuel Macron says it was absurd to worry that blackouts would cripple infrastructure, while officials warn of possible outages and France’s Banking Federation said cash machines would be affected.

Traders, trying to assess how deep Europe’s economic slowdown will prove, should pay attention to the weather report.

Can the United States ward off a recession as consumer prices come off the boil?

Investors get a fresh read-out on the world’s top economy and its inflation pressures on Tuesday when November housing starts and existing home sales numbers are due. In October, rising mortgage rates saw U.S. existing home sales sink for a record ninth straight month, home-building fell sharply with single-family projects dropping to a near 2-1/2 year low.

Wednesday will see the Conference Board consumer confidence survey, which slipped to a four-month low in November. The reading for the personal consumption expenditures index is also for release on Dec. 23 after recent inflation data came in softer-than-expected.

A set of emerging market central banks will mark the end to a year in which the scale and pace of rate hikes in developing economies hit multi-year highs.

In emerging Europe, where inflation pressures are still persistent, policy makers in Hungary and the Czech Republic are set to meet on Tuesday and Wednesday, both of which held rates stable at the last meetings but pledged to tackle inflation.

Thursday has meetings scheduled for Indonesia – where the central bank has just seen growth added to its mandate – as well as Egypt, which is in line for support from the International Monetary Fund. Outlier Turkey is due to make a decision the same day, though watchers expect no change after rates were lowered to single digits ahead of next year’s election despite rising inflation.

‘Tis the season to be bullish about the year ahead, at least if you sell stocks for a living. With recessions looming in the United States and Europe, however, money managers expect another poor year for equities and are huddling around lower-risk trades.

Investors surveyed by Deutsche Bank (ETR:DBKGn) predict a 2.2% fall for the S&P 500 next year, citing a worse-than-expected recession.

One trend many agree on is that inflation will subside, powering enthusiasm for U.S. Treasuries and investment grade corporate credit following a rout in 2022.

Expectations of a softer dollar as the U.S. economy slows have sparked optimism about emerging markets, which should also benefit from China easing COVID-19 restrictions. Money managers are widely betting on the yen against the dollar, as speculation mounts that the BoJ will move away from its ultra-dovish monetary policies.