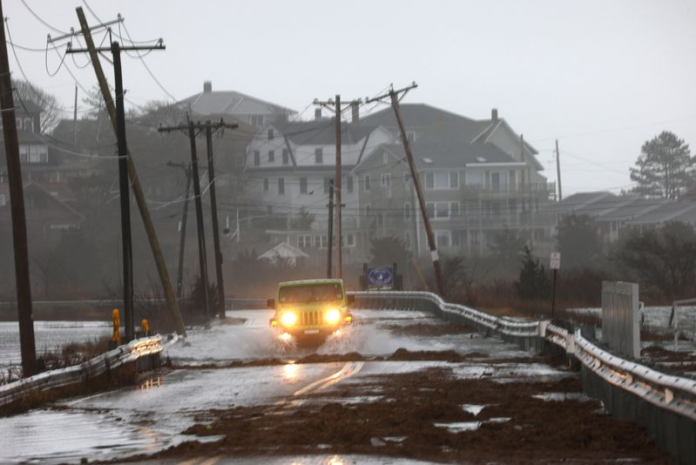 By Erwin Seba and Scott DiSavino

(Reuters) -Frigid cold and blowing winds on Friday knocked out power and cut energy production across the United States, driving up heating and electricity prices as people prepared for holiday celebrations.

Winter Storm Elliott brought sub-freezing temperatures and extreme weather alerts to about two-thirds of the United States, with cold and snow in some areas to linger through the Christmas holiday.

Some 1.5 million barrels of daily refining capacity along the U.S. Gulf Coast was shut due to the bitterly cold temperatures. The production losses are not expected to last, but they have lifted fuel prices.

Freeze-ins – in which ice crystals halt oil and gas production – this week trimmed production in North Dakota’s oilfields by 300,000 to 350,000 barrels per day, or a third of normal. In Texas’s Permian oilfield, the freeze led to more gas being withdrawn than was injected, said El Paso Natural Gas operator Kinder Morgan Inc (NYSE:KMI)..

Power prices on Texas’s grid also spiked to $3,700 per megawatt hour, prompting generators to add more power to the grid before prices fell back as thermal and solar supplies came online.

New England’s bulk power supplier said it expected to have enough to supply demand, but elsewhere strong winds led to outages largely in the Southeast and Midwest; North Carolina counted more than 187,000 without power.

“Crews are restoring power but high winds are making repairs challenging at most of the 4,600 outage locations,” Duke Energy (NYSE:DUK) spokesman Jeff Brooks wrote on Twitter.

About half of the power generated in New England comes from gas-fired plants, but on the coldest days, power generators shift to burn more oil. According to grid operator New England ISO, power companies’ generation mix was at 17% from oil-fired plants as of midday Friday.

Gas output dropped about 6.5 billion cubic feet per day (bcfd) over the past four days to a preliminary nine-month low of 92.4 bcfd on Friday as wells froze in Texas, Oklahoma, North Dakota, Pennsylvania and elsewhere.

That is the biggest drop in output since the February 2021 freeze knocked out power for millions in Texas.

One billion cubic feet is enough gas to supply about 5 million U.S. homes for a day.