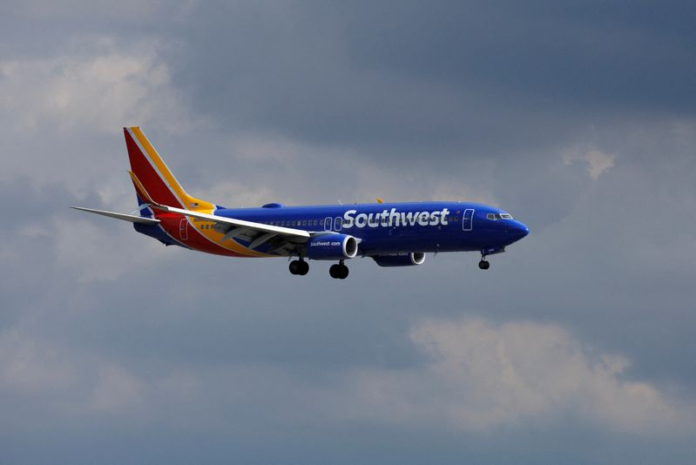 By David Shepardson and Alexandra Alper

(Reuters) -Southwest Airlines came under fire from the U.S. government on Tuesday after it canceled thousands of flights, and its boss, Bob Jordan, said the low-cost carrier needed to upgrade its legacy airline systems.

U.S. airlines have canceled thousands of flights as a massive winter storm swept over much of the country before the Christmas holiday weekend, but Southwest’s woes have deepened while other airlines have largely recovered.

The cancellations drew criticism from Transportation Secretary Pete Buttigieg for what he termed a “meltdown.” He told CNN that the company’s union leaders had told him they had been “raising the alarm” about technology issues at Southwest systems for some time.

Jordan apologized to customers and employees in a video message and said: “Clearly we need to double down on our already existing plans to upgrade systems for these extreme circumstances so that we never again face what happening right now.”

The Dallas-based carrier, which typically has an aggressive schedule that connects vast swathes of the country, has scrapped more than 12,000 flights since Friday.

On Tuesday, it canceled more than two-thirds of its 4,000 scheduled flights, accounting for more than 90% of all U.S. airline cancellations, tracking website FlightAware showed.

The airline said it would operate roughly a third of daily flights for the next several days.

“We’re optimistic to be back on track before next week,” Jordan said.

Buttigieg told NBC: “This has clearly crossed the line from what’s an uncontrollable weather situation to something that is the airline’s direct responsibility.”

Buttigieg, who said he had spoken with Jordan, said that he was holding the airline responsible for making sure this did not happen again and that the airline offered refunds, meals and hotel fares for those who were stuck.

He tweeted that several airlines had agreed to cap fares on routes where Southwest Airlines (NYSE:LUV) was struggling to get passengers home. American Airlines (NASDAQ:AAL) said in a tweet it was capping fares in select cities.

Southwest told Reuters that it would reimburse customers for travel-related costs and that it had already processed thousands of requests by early Tuesday.

U.S. President Joe Biden said his administration was working to ensure airlines were “held accountable,” according to a tweet on his official POTUS handle.

Southwest shares closed down 6% at a two-month low.

Southwest earns most of its profits flying domestically and relies on a point-to-point service instead of operating out of large hubs. This leaves staff vulnerable to being stranded during disruptions, and the weather has thrown Southwest’s staffing into chaos.

“Southwest is using outdated technology and processes, really from the ’90s, that can’t keep up with the network complexity today,” Casey Murray, president of the Southwest Airlines Pilots Association, told Reuters.

Murray said the software, Sky Solver, had been developed in house, and although Southwest’s flight scheduling model was more complex than others, it could still be handled with a good software.

“We had aircraft that were available, but the process of matching up those crew members with the aircraft could not be handled by our technology,” Southwest said, adding crew schedulers had to match planes with staff manually which is “extraordinarily difficult.”