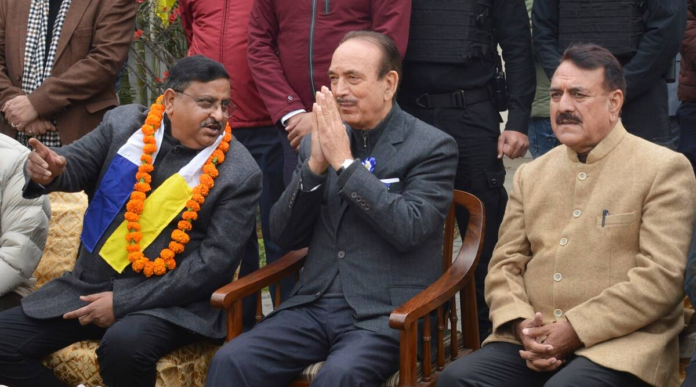 “I do not know what the approach of the government is, but if our party comes to power, we will do this only (temporarily shift such employees to Jammu),” he said.

“Unfortunately, some incidents have happened. Life is a priority and so I am of the opinion that Kashmiri Pandit employees be transferred to safer places in Jammu. When the situation improves, they should be brought back,” Azad told reporters in Srinagar.

“I do not know what the approach of the government is, but if our party comes to power, we will do this only (temporarily shift such employees to Jammu),” he was quoted as saying by PTI.

When asked about the delay in holding the Assembly elections in Jammu and Kashmir, the Democratic Azad Party chief said, “We have been waiting for the last six years. I raised the issue many times in Parliament as well. They show us Panchayat elections or DDC polls, but the real election is that of assembly which is not taking place”

Azad’s comments come days after Jammu and Kashmir Lieutenant-Governor Manoj Sinha, in a “clear message” to agitating Kashmiri Pandit employees and reserved category employees, said no salary would be given to them while they “continue to sit at home”.

Migrant Kashmiri Pandits have been protesting against the decision of the government claiming that they are being threatened by the terrorists and can’t go back to work.

“We are receiving death threats repeatedly, the latest being on Wednesday night. We were told that a policeman would be posted outside the place of our posting. But we do not trust the security policy of the administration,” a Kashmiri Pandit was quoted as saying by ANI.

At The Indian Express Idea Exchange on Friday, Sinha said though it was a fact that some Kashmiri Pandits became victims of targeted killings, the country should stop seeing this on the basis of religion since a lot of other people have also been killed.

(With inputs from agencies)

Share
Facebook
Twitter
Pinterest
WhatsApp
Previous article
BJP’s Gujarat Win To Have “Positive Impact” On 2024 Elections: Amit Shah
Next article
Whenever I go out to bat, I want to put up a show: Suryakumar Yadav