HomeNewsShami and Siraj are relentless with their lines and lengths: Tom Latham

Shami and Siraj are relentless with their lines and lengths: Tom Latham 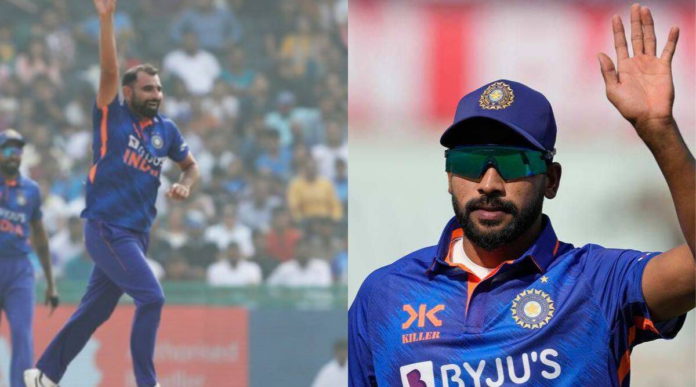 Michael Bracewell had brought New Zealand back from nowhere in the first ODI but the visitors crumbled to 108 all out here on Saturday. Shami and Siraj generated prominent seam movement to run through the top-order and New Zealand could not recover from the early blow.

New Zealand skipper Tom Latham said the relentlessness of Mohammed Shami and Mohammed Siraj in their lines and lengths was the main cause of their second straight batting failure in the ODI series against India.

Michael Bracewell had brought New Zealand back from nowhere in the first ODI but the visitors crumbled to 108 all out here on Saturday.
Shami and Siraj generated prominent seam movement to run through the top-order and New Zealand could not recover from the early blow.

“Anytime that Siraj and Shami are in the side – they’re obviously quality bowlers and as I said they were both relentless in terms of the lines and lengths they bowled and they gave us nothing to score from.

“Fortunately for them, it was their day and unfortunately for us, we weren’t able to absorb enough pressure and put that back on them,” said Latham after the eight-wicket loss.

“When you get bowled out for just over a 100 obviously makes things pretty difficult. Unfortunately it was just one of those days where everything India did turned their way and that’s the game of cricket we play. Fingers crossed that we can turn things around in the next game.” Talking about the mindset of batters after Rohit Sharma put New Zealand in to bat, Latham said: “I think just build partnerships.

That’s something we pride ourselves on as a batting unit – building partnerships and obviously at the top, we weren’t able to do that.
“Mitch (Santner) and Michael Bracewell managed to build a little partnership, and then Glenn (Phillips) and Santner did the same but as I said when you’re bowled out for a hundred, it’s tough to come back from there,” said Latham.

Bracewell made his intentions clear despite New Zealand losing their five wickets for 15 runs. Unlike on Wednesday, he could not go on and play a big knock but his style of play left the captain impressed.

“Everyone has their plans and the approach they would like to go with and obviously Brace is an attacking player. He plays at his best when he takes the game on and for him he obviously thought that was the best option in terms of how to play.

“The way he came out and the intent he showed was outstanding. So, for us, I’m sure he would have liked to go a little bit longer. But, as I said, everyone has got their own plans and the approaches they like to play with.