HomeEntertainmentRajamouli – Westerns went crazy for RRR like how Indians did

Rajamouli – Westerns went crazy for RRR like how Indians did 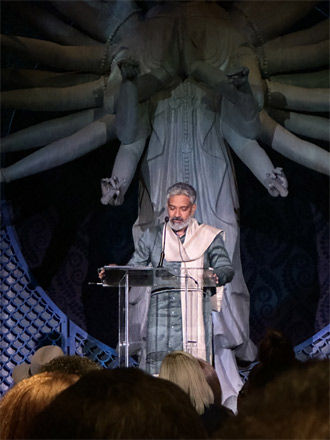 Earlier today, we reported that SS Rajamouli. India’s pride and the man behind the masterpiece RRR, landed in New York along with his family to attend the prestigious New York Film Critics Circle Awards 2022.

The sensational director was conferred with the Best Director award for his masterwork RRR, released in April 2022. He received the award today and the audience gave him a standing ovation for winning the award because of his phenomenal work. Speaking on the occasion, Rajamouli said that the Westerns went crazy for RRR like how Indians did. The star-maker also thanked audiences for making RRR a global blockbuster. Rajamouli’s speech won the hearts of the audience.

On the other hand, audiences have huge expectations on RRR’s win at Golden Globe Awards in Best Movie and Best Original Song categories. The event is scheduled to happen on January 11, 2023. Ram Charan and Tarak will grace it.