HomeNewsRafael Nadal says he is ‘not at that point’ where he is... 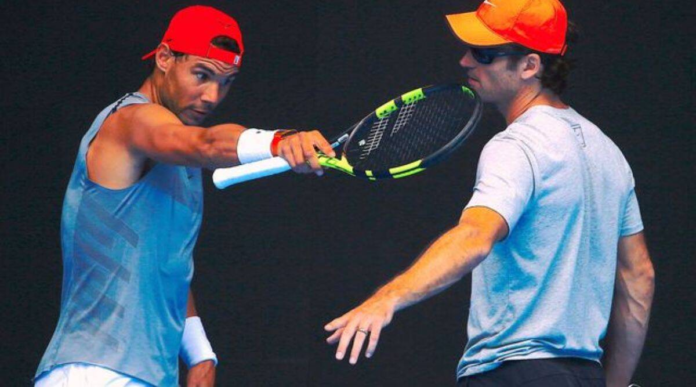 In a recent interview, the Spaniard spoke about the emotional farewell of Roger Federer, his chronic foot injury, and his season at large.

In a candid interview with Spanish publication MARCA, Rafael Nadal said that he is not visualising his own retirement yet after being present at the moving farewell for his rival Roger Federer at the Laver Cup this year. “I know that that moment is closer than it was last year, without any doubt, and than it was two years ago,” he said. “But in the end it’s a thing that when it has to happen, it will happen. I would like it to be on a tennis court, that’s for sure.”

The Spaniard reiterated the thought when he was asked about playing the Paris Olympics in 2024, the tennis round for which will take place in Roland Garros, where he has been triumphant 14 times. “Well, I don’t know. I really don’t visualize it. Besides, there is another issue and that is that when you start thinking a lot about retirement you are already entering that dynamic and I am not at that point.”

Nadal said that Federer’s retirement, after a buildup of nearly two years following his knee operations, was a landmark moment in the world of sport, comparing it to that of Zinedine Zidane or the eventual retirement of Lionel Messi and Cristiano Ronaldo. “They are people you have grown up with for a lifetime, sharing moments and watching them on television, so they are almost like your family,” he said.

On the subject of Federer, Nadal weighed in on the debate over who is the greatest of their generation, a debate that has raged on more loudly and contentiously as the trio of him, Federer, and Novak Djokovic have come close to the end. The Spaniard said that personal biases dictate the debate. “There will be one who will be the best, which I don’t think is easy to define because everyone has their arguments to defend one player or another beyond the objective data,” he said. He did emphasise, however, the fact that the trio have pushed each other to the limit to be able to achieve what they have.

Radio frequency saved him from retirement

Nadal, who had a landmark 2022 which saw him win the Australian and French Open and reach the Wimbledon semifinals, has also spent the majority of the second half of the year recovering and dealing with injuries. During the interview, Nadal revealed that after winning the French Open by using injections to numb the chronic pain in his foot, he knew he would be forced to retire until he found an appropriate solution for the injury.

Nadal suffers from the Muller-Weiss syndrome, a degenerative foot condition that causes him chronic pain in his heel. The Spaniard began a new radiofrequency treatment in June ahead of Wimbledon, which he says is showing positive results.

“The truth is that I have done it many times after Wimbledon because the injury is incurable and when the nerve starts to hurt you have to do it again,” he said about the treatment. “Now I am much happier, beyond winning or losing on the court, because I was suffering from a limp. I played tennis with lots and lots of anti-inflammatories but I was limping all day long. I thought I had to quit tennis because I had lost my vitality and I was a sad person most days.”

Nadal will now be playing at the United Cup – a new mixed event between ATP and WTA – in Australia starting December 31 prior to the Australian Open which begins on January 17.