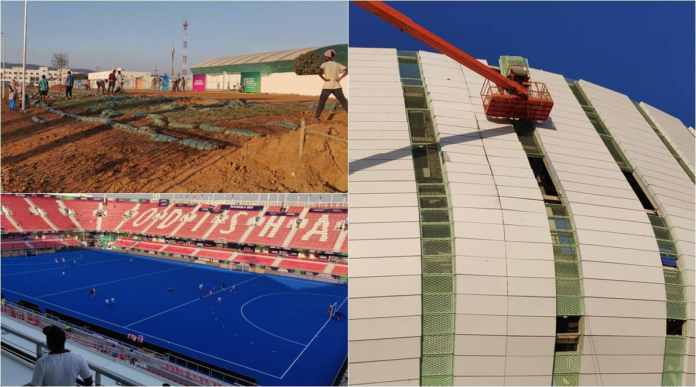 The marquee event comes to the state for the second successive edition, with Rourkela being beautified with one eye on political considerations.

The walls are still wet and the stench of oil paint fills the air inside the lobby. Earthmovers continue to plough away outside, where rolled-up grass is being carefully laid on muddy sidewalks as a workforce of hundreds – the majority from Jharkhand, Bihar and Uttar Pradesh – hammer nails into steel frames and clean the façade, applying finishing touches to the stadium they constructed in just 15 months.

Two days before hosting its first-ever World Cup match, Rourkela’s Birsa Munda Stadium still resembles a construction site. But there seems no sense of urgency – unlike in the lead-up months when work didn’t stop even for a second. Instead, there is a sense of accomplishment.

In December 2021, this was just one big hole in the ground. Now, it’s been turned into an impressive cauldron, the kind of hockey stadium that’s unlike any other in the country in design, size and, hopefully, atmosphere given that the stands are close to the pitch and literally hang on top of it.

The Dutch used the heart-eyes emoji on their social media page after their first training session on the newly-laid turf. Last World Cup’s finalists, the Netherlands took a chartered flight from Bhubaneswar on Wednesday morning to reach Rourkela, where a single-strip aerodrome was upgraded just for the tournament.

From the airstrip, which is adjacent to the stadium, they were driven straight to their accommodation – a 200-room hotel that was a Covid hospital a couple of years ago – less than 200m away from the training pitch and the main stadium.

En route to the massive complex, there are murals of hockey players on walls, pavements and buildings. The streets are aesthetically lit up, and a replica of the World Cup trophy sits pretty at the ‘Hockey Chowk’, where a plaque is a reminder of all the top players who have come out of this area.

The list is long: Lazarus Barla, Dilip Tirkey, Prabodh Tirkey, William Xalco…Tokyo Olympians Deep Grace Ekka, Birendra Lakra and Amit Rohidas, who is now the vice-captain of India’s 18-member team, which has another player from the region – Nilam Xess.

On state government social media channels, the hashtag ‘Hockey Comes Home’ has been frequently used. While it’s a blatant copy of England’s ‘football comes home’ phrase, the sentiment remains the same – this belt, after all, is one of the cradles of Indian hockey.

When the International Hockey Federation (FIH), in November 2019, chose Odisha as the venue to host its flagship event for the second time in a row, it was assumed Bhubaneswar would be the sole host city, like it was in 2018.

But in what is believed to be a last-minute decision, Chief Minister Naveen Patnaik, whose party Biju Janata Dal has been trying to make inroads into Western Odisha, announced Rourkela as a co-host of the tournament, which concludes on January 29.

It’s come at a massive cost. Recently, Odisha’s Sports and Youth Services Minister Tusharkanti Behera submitted in the Assembly that an outlay of Rs 1,098.4 crore has been made in the 2022-2023 state budget for construction of the stadium in Rourkela, upgradation of Bhubaneswar’s Kalinga Stadium and the beautification of the two cities. According to reports, the budget for the previous World Cup in Bhubaneswar was Rs 66.98 crore.

This is one of the biggest, and most expensive, hockey World Cups ever, and comes at a time when Odisha’s influence in not just Indian but world hockey is rapidly increasing. The state has been a regular host of international events for the better part of the last decade, is the sponsor of the national hockey teams until 2033, the president of Hockey India – former India captain Dilip Tirkey – hails from the state, which is one of the partners of the international federation as well.

In an earlier interview, Odisha sports secretary Vineel Krishna had said that because of these reasons, which will possibly lead to more events being held here in the future, fears that Rourkela’s brand-new stadium will turn into a white elephant are unfounded.

Whether the city needs this extravagant showpiece is a different – and relevant question – altogether. Even for the World Cup, the beautification is largely visible around the spacious steel township rather than the denser civil areas. For whom, is another question on the minds of the locals.

“Hockey is popular, no doubt, but it’s important for 10 – maybe 20 – percent of the population here,” says Rourkela resident Pramod Baag, a driver. “The World Cup is for 20 days but after that, what happens to all this? Instead of hundreds of crores on a stadium, if they would have built a hospital, it would have been helpful to more people. Right now, we have to go to Bhubaneswar for a major medical issue.”

This has been a burning issue as the World Cup drew near. And the ploy to use the marquee event to raise the state’s and government’s profile is hard to miss, especially after Patnaik recently invited all chief ministers to experience the tournament.

And yet, the buzz in the city is unmistakable – the long queues outside the stadium to redeem match-day tickets, the giant earthmovers, the last-minute rush for the finishing touches and the echo of the ball being thwacked off Dutch sticks, all adding to the sights and sounds on tournament eve.

How the money was spent

Rs 875.78 crore – outlay for the construction of Birsa Munda Stadium in Rourkela and the upgradation of Kalinga Stadium in Bhubaneswar

Rs 17.5 crore: Amount spent on new artificial turfs at the stadiums in Rourkela and Bhubaneswar