HomeEntertainmentPathaan targets Hrithik Roshan and Salman’s movies in this aspect

Pathaan targets Hrithik Roshan and Salman’s movies in this aspect 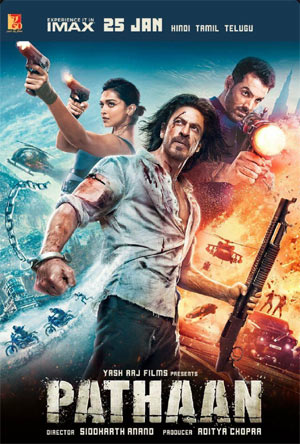 The Bollywood biggie Pathaan is all set to release in theatres on 25th January. Shahrukh admirers have planned a huge number of fan shows to celebrate the arrival of King Khan. The movie has also completed its censor formalities. The advance bookings have opened, and the trend is fantabulous.

Till more than 2 lakh tickets have been sold for Pathaan in three national chains PVR, Inox, and Cinepolis. In Bollywood, Hrithik Roshan’s War and Salman Khan’s Prem Ratan Dhan Payo hold the record for the best pre-sales from these national chains, with 4.05 and 3.40 lakhs tickets sold, respectively.

The trend suggests that Pathaan will comfortably cross both these films and will emerge as the top Bollywood flick in terms of advance sales. Pathaan is directed by Siddarth Anand, of War fame. Hot beauty Deepika Padukone is the female lead, and John Abraham plays the antagonist. Yash Raj Films produce this spy action thriller.