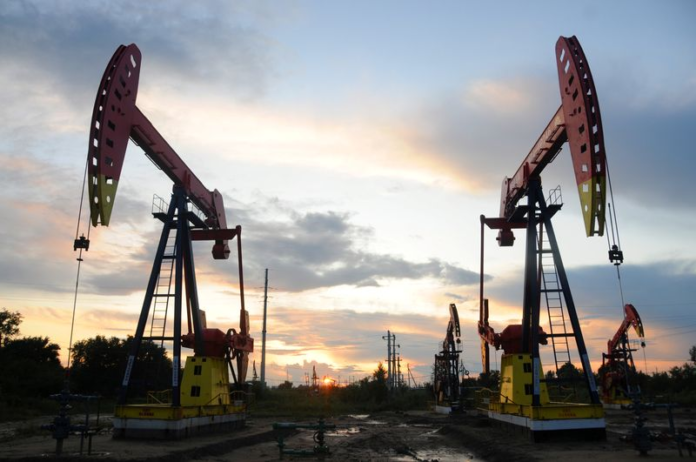 NEW YORK (Reuters) -Oil fell by around $1 a barrel on Thursday in volatile trade as the impact of tighter U.S. crude stocks due to a winter storm in the United States was outweighed by fears that Federal Reserve interest rate hikes and China’s rising COVID-19 cases would dent demand.

Both benchmarks had risen by $1 a barrel earlier in the session.

Oil gave up its daily gains after the release of U.S. economic data showed the number of people filing new claims for unemployment benefits increased less than expected last week and the economy rebounded faster than previously estimated in the third quarter.

The rosy data increased concerns the Fed was more likely to intensify its rate hikes in a move that could slow the economy and hamper fuel consumption.

“That started to ruin the momentum because of fears the Fed would be back chopping down the market again,” said Phil Flynn, an analyst at Price Futures Group in Chicago.

Also keeping a lid on prices was a rising U.S. dollar and fall in equities, said Jim Ritterbusch of Ritterbusch and Associates, along with demand worries stemming from China’s COVID-19 surge.

China may be struggling to keep an accurate count of COVID-19 infections as it experiences a big spike in cases, a senior World Health Organization official said on Wednesday, amid concerns about a lack of data from the country.

A Shanghai hospital told its staff to prepare for a “tragic battle” with COVID-19 as it expects half of the city’s 25 million people will get infected by the end of next week, as the virus sweeps through China largely unchecked.

Both benchmark oil contracts jumped on Wednesday after government data showed U.S. crude inventories fell by much more than analysts had expected, posting a drop of 5.89 million barrels for the week ending Dec. 16. [EIA/S]

Distillate stocks, which include heating oil and jet fuel, also declined, going against expectations for a build, in what PVM analyst Stephen Brennock called “an overwhelmingly price-supportive stock report from the EIA.”

Stockpiles fell as demand for heating oil was set to soar because of the powerful winter storm, with sub-zero wind chills expected as far south as Texas and record-breaking lows forecast for Florida.