HomeEntertainmentNikhil’s 18 Pages wraps up its censor

Nikhil’s 18 Pages wraps up its censor 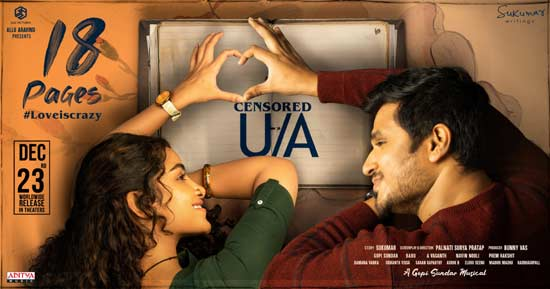 Actor Nikhil was lying low with not many releases in the last two years. His special film, Karthikeya 2 was delayed a lot but when it was finally released, it made heads turn all over.

Nikhil will next be seen in a film called 18 Pages which will release on the 23rd of this month. The word now is that the film has wrapped up its censor with an U/a certificate. The board members have liked the film immensely is the news.

After Karthikeya 2, Anupama Parameswaran is again paired up with Nikhil in this movie. Directed by Palnati Surya Pratap, the flick is produced by GA2 Pictures and Sukumar Writings. Gopi Sundar is the music director of this movie.