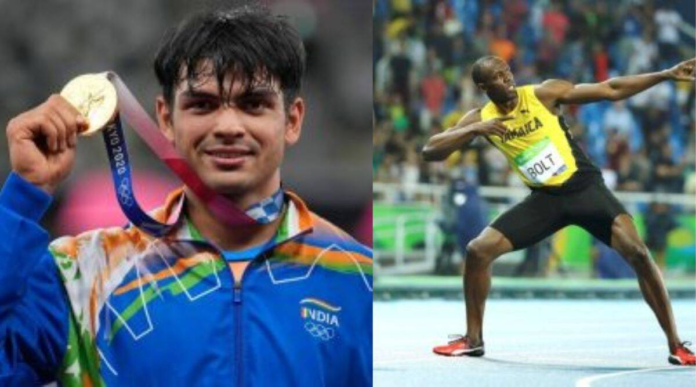 This is the first time that Bolt, who retired in 2017 and who still holds the world record in 100m and 200m, has not led the list.

Olympic champion Neeraj Chopra has dislodged the iconic Usain Bolt as the “most visible” athlete in the world after winning a historic gold medal in the Tokyo Games, claimed a World Athletics study.

The 24-year-old Indian further enhanced his superstar status by winning a silver at the world championships.
Chopra led a star-studded field in terms of media coverage with 812 articles published in his name, followed by Jamaican sprint trio of Elaine Thompson-Herah (751), Shelley-Ann Fraser-Pryce (698) and Shericka Jackson (679).

The charismatic Bolt, also a Jamaican, was in the fifth spot with 574 articles in his name, according to the statistics released by World Athletics during President Sebastian Coe’s year-end interaction with a select group of Asian journalists, including from PTI.

The data was provided by Germany-based media monitoring firm Unicepta.

This is the first time that Bolt, who retired in 2017 and who still holds the world record in 100m and 200m, has not led the list.

“I am not being dismissive of Usain Bolt. He is an icon of our sport. But this (Chopra leading the list) shows we are broadening our horizon, we are now not talking about only one athlete, we have many,” Coe said.

Chopra continued his meteoric rise this year after his Tokyo Olympics gold, winning silver in the world championships in Eugene, USA, and then became the first Indian to win the Diamond League final title.

Chopra’s success has put Indian athletics on the global stage, but the country is also in the top bracket of producing dope offenders with several top performers, including the likes of Olympians Kamalpreet Kaur, Shivpal Singh and MR Poovamma testing positive for banned drugs recently.

Asked if his organisation is concerned of this kind of development, Coe said World Athletics remained “vigilant” regarding countries like India not as “infringers” but on the basis of producing a large number of elite athletes.

“We are vigilant particularly around countries which have a lot of elite level athletes and India falls in that bracket. Countries like Ethiopia, United Kingdom, USA, Germany, all these countries have big contingents of elite athletes and therefore identifies not necessary as culprits or infringers but it does identify the level of risk simply based on the number of elite athletes.

“I know the Indian federation is very keen to do everything it possibly can alongside every other federation out there to minimise the chance of athletes of falling foul of performance enhancing drugs.”

The 66-year-old Coe, himself a double Olympic gold medallist in 1500m, said 2022 was an extraordinary year in world athletics — in terms of athlete performance, competitions and financial aspect.

“Full season of Diamond League events and 162 Continental Tour events around the world where over 13,000 athletes competed from 159 countries…. Across both these one-day leagues 9 Area Records and 173 National Records were set.” He said the number of personal best recorded throughout the season across the 180,000 elite athletes tracked was over 400,000.