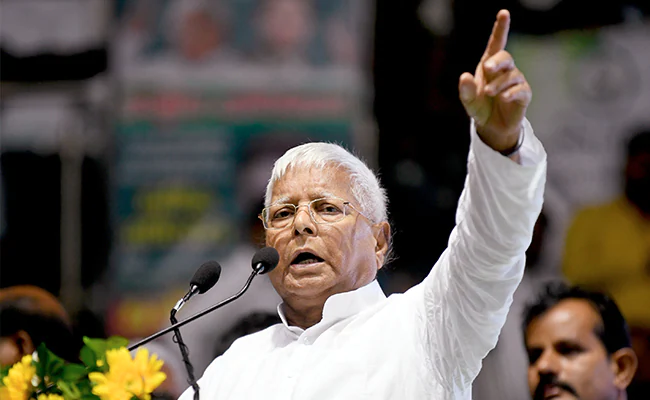 The CBI had in 2018 started a probe into allegations of corruption in the allotment of Railway projects when Lalu Yadav held the portfolio in the UPA-1 government.

In a move that will likely raise a political storm, the Central Bureau of Investigation (CBI) has reopened a corruption case against former chief minister Lalu Prasad Yadav, months after the Bihar reversal in which his party tied up with Nitish Kumar’s Janata Dal United (JDU) and formed the government.

The CBI had in 2018 started a probe into allegations of corruption in the allotment of Railway projects when Mr Yadav held the portfolio in the UPA-1 government.

The inquiry was closed in May 2021, with CBI sources saying that “no case has been made out of the allegations”. Apart from Mr Yadav, his son and Bihar’s Deputy Chief Minister Tejashwi Yadav, and daughters Chanda Yadav and Ragini Yadav are among those named in the case.

The CBI’s move to reopen the case comes months after Nitish Kumar parted ways with the BJP in Bihar and joined hands with Rashtriya Janata Dal (RJD) to form the government. Mr Kumar had then alleged a BJP plan to split his party.

The CBI’s fresh move is expected to spark a massive political row as Opposition parties double down on their allegations of the misuse of probe agencies by the BJP-led central government.

The case alleges that Mr Yadav received a south Delhi property as bribe from real estate major DLF Group, which was interested in rail land lease projects in Mumbai’s Bandra and the revamp of the New Delhi Railway Station.

It is alleged that the property was bought by a DLF-funded shell company at ₹ 5 crore — much lower than the then market rate of ₹ 30 crore. The shell company was then bought by Tejashwi Yadav and other relatives of Mr Yadav for a mere ₹ 4 lakh by a transfer of shares, giving them ownership of the south Delhi bungalow, the case alleges.

The move also comes at a time when 73-year-old Mr Yadav is recovering after a kidney transplant surgery earlier this month.