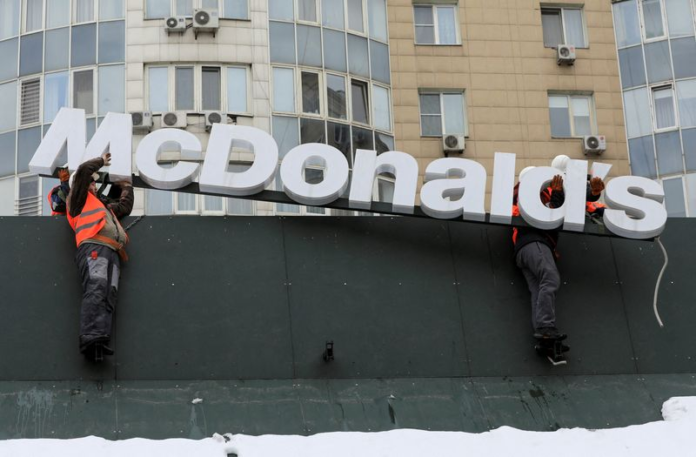 The brand’s exit from the Central Asian nation of 20 million divided opinion on social media and among onlookers near one of the Almaty restaurants where workers were taking down the large white letters from the top of the building.

“It was one of the nicest places where I used to spend time with my friends,” said local resident Karina, who only gave her first name.

“I doubt any other company will be able to compete with McDonald’s in Kazakhstan at the moment as no other fast food chain can replicate the menu that McDonald’s had for the same price.”

Others described the brand’s departure as a minor inconvenience or said they would check out other fast food joints.

Chains such KFC, Burger King, and Hardee’s have restaurants in Kazakhstan and Popeyes said last month it would open dozens of restaurants in the former Soviet republic in partnership with local firm Centras Group.

Many Kazakhs, proud of their meat-focused cuisine, expressed incredulity that McDonald’s Kazakh licensee, Food Solutions KZ, could not source its beef patties locally and imported them from Russia until the war forced it to stop and ultimately shut down.

Industry insiders, however, say certificates and audits required by the U.S. brand were expensive and lengthy, and local meat producers did not want to bother with them.

Food Solutions did not immediately respond to an email requesting comment. McDonald’s said its agreement with the licensee had been terminated but did not answer questions about the reasons.

The Kazakh company said on Thursday it would soon reopen its restaurants under a new brand due to “supply issues”.

Many Kazakh businesses have faced supply problems in the wake of Russia’s invasion of Ukraine and the Western sanctions against Moscow that followed. Neighbouring Russia is Kazakhstan’s main trading partner.