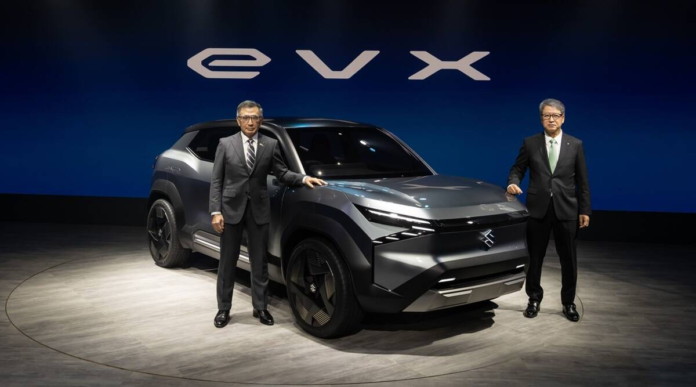 Maruti Suzuki India Ltd. plans to launch its first electric car in 2025 and in doing so is expanding away from its traditional compact offerings in an attempt to recover ground ceded to rivals like South Korea’s Hyundai Motor Co.
India’s biggest automaker will make batteries for its mid-sized electric sports utility vehicle, dubbed the eVX or ‘Emotional Versatile Cruiser’, in Prime Minister Narendra Modi’s home state of Gujarat, Suzuki Motor Corp. President Toshihiro Suzuki told reporters at India Auto Expo 2023 on the outskirts of New Delhi.

Maruti Suzuki’s plans for a pure electric SUV are interesting given its long-held position that passenger vehicles powered by hybrid technology, natural gas and biofuels are a cleaner way to curb emissions in a country that generates more than 70% of its electricity from dirty coal. Suzuki didn’t move away from that much on Wednesday, saying the carmaker will still double down on other alternate technologies.

“Given the power supply situation, electric vehicles alone can’t be the solution in India,” Suzuki said.

Maruti, once the unrivaled leader in India’s automobile market, now faces stiff competition from players like Hyundai, which was quick to capitalize on the rising demand for SUVs and bigger cars.

“Maruti couldn’t sustain its 50% market share in India because there was a delay in launching SUVs,” Suzuki said. He said the company does however see growth in India’s small car market and will work to introduce battery-powered options in that segment.