HomeNewsLeft Parties, Congress Hint At Poll Alliance To Take On BJP In...

Left Parties, Congress Hint At Poll Alliance To Take On BJP In Tripura 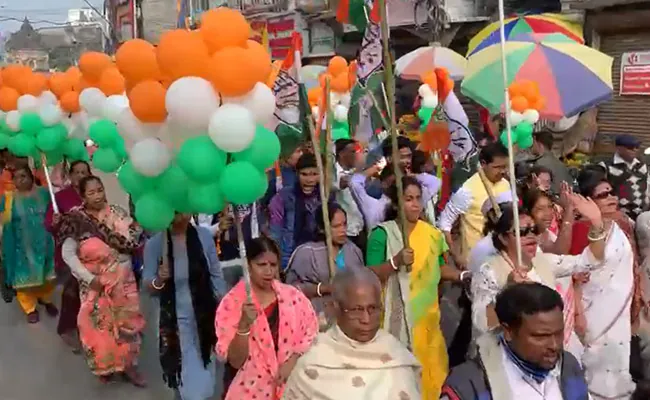 With crucial assembly polls in Tripura, one of the three northeastern state, to take place in early February next year, a new political development is being forged between the Congress and Left parties, NDTV has learnt.

The new partnership – similar to the one in the 2021 Bengal polls – is being planned to take on the BJP in the northeastern state.

The talks about the possible alliance gained ground after five Left parties including CPM and the Congress on Tuesday jointly appealed to the people to come forward cutting across political identity, religion, caste and community to raise united voice against this misrule of BJP.

The ruling BJP has, however, dismissed the possible alliance between its opposition parties as a “rejected idea”.

Reacting on the possible Congress-CPI-M alliance, Tripura Chief Minister Manik Saha said, “Like West Bengal, the people of Tripura would reject them. In the Tribal autonomous body and urban local bodies’ elections, both the parties (Congress and CPI-M) have performed poorly and it will be repeated in the coming assembly polls,” Saha told reporters at Agartala.

“We are here to fight the fascist forces and people of Tripura should fight for their rights,” Mr Kumar told the media, adding that due to the misgovernance of the BJP-led alliance, people are fed up of with the BJP and keen to come in a common platform. “They (BJP, RSS) are destroying the legacy of Congress. Some call Narendar Modi as the father of the nation, others call Mohan Bhagwat. BJP has so many fathers but we have only one father of the nation – Mahatma Gandhi. Tomorrow they will make Amit Shah another father of the nation,” Mr Kumar said.

In recent times, top Congress leaders and their CPI-M counterparts have been seen sharing the same dais leading to talks about the alliance.

“There is no rule of law in Tripura and the constitution failed during the last 58 months of BJP governance. A conducive atmosphere should be there before the coming assembly elections. We have also urged the Election Commission to create the appropriate environment for the free and fair elections,” said Jitendra Chowdhury, State secretary of CPI(M) in Tripura and former Lok Sabha MP.