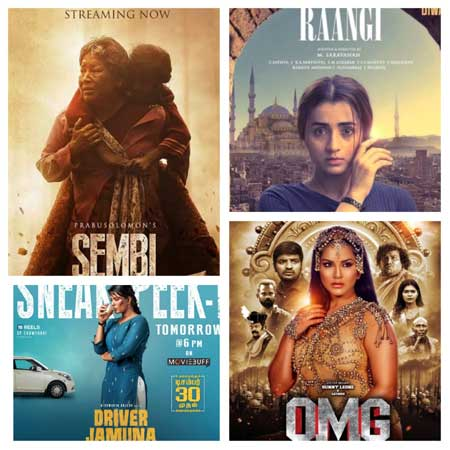 This week Kollywood has four releases, and all of them are female-oriented. They are Trisha’s Raangi, Aishwarya Rajesh’s Driver Jamuna, Sunny Leone’s Oh My Ghost, and Kovai Sarala’s Sembi. It is interesting that four women-centric films are clashing at the box office at the same time.

Trisha’s Raangi is an action thriller directed by M. Saravanan. The movie is produced byAllirajah Subaskaran under the banner of Lyca Productions. C Sathya composed the tunes for the film, which hit the screens today.

On the other hand, Driver Jamuna is a road thriller about a cab driver who gets stuck in a complex situation. It is produced by SP Chowthari of 18 Reels and is directed by Kinslin. The music is composed by Ghibran, and the film was released today.

Sunny Leone’s Oh My Ghost is a horror comedy, as the name suggests. Directed by Yuvan R, the movie has hit the screens today. Kovai Sarala’s Sembi is a hard-hitting drama directed by Prabhu Solomon and released today. Women-centric films do come rarely, and this week there are two releases. Let’s see which film impresses the audience.