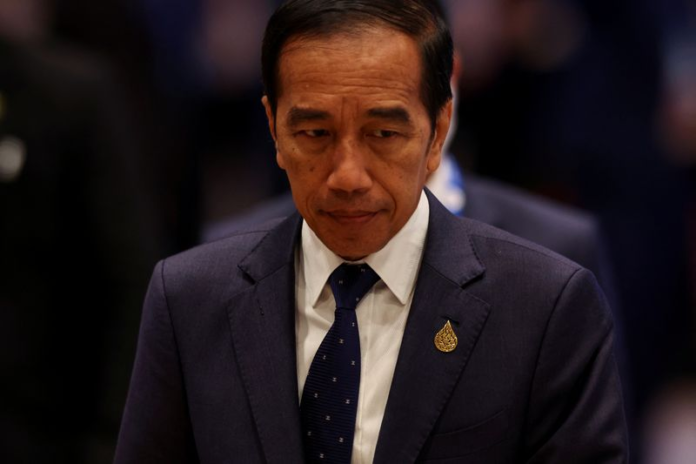 By Ananda Teresia and Gayatri Suroyo

JAKARTA (Reuters) -Indonesia’s President Joko Widodo signed an emergency regulation on Friday to replace a controversial job creation law that a court had ruled was flawed, arguing global economic uncertainty next year gives him a legal basis for such a move.

Some legal experts criticised the regulation as a government ploy to bypass proper debate in parliament.

The Constitutional Court last year ruled the passage of the president’s vaunted Jobs Creation Law was flawed due to inadequate public consultation and ordered lawmakers to restart the process within two years, or it would be deemed unconstitutional.

“We know it looks like we’re normal now, but global uncertainty, risk is haunting us … Actually the world is not doing fine,” the president, widely known as Jokowi, told a news conference.

He also argued Indonesia’s economy would rely on investment and exports in 2023 and that legal certainty about the law was important to maintain good investor perception.

Passed in 2020, the so-called “omnibus” law revised more than 70 other laws and was lauded by foreign investors for streamlining business rules in Southeast Asia’s largest economy, which is notorious for its onerous bureaucracy.

But it also sparked nationwide protests from workers, students and green groups, who said it eroded labour and environmental protections.

Jokowi’s chief economic minister Airlangga Hartarto said the main considerations in issuing the emergency rules were a global recession risk in 2023, the conflict in Ukraine, the potential for global food, energy and monetary crises, as well as climate change.

Chief security minister Mahfud MD said “strategic measures” were needed in this case as the regular process to comply with the ruling would take too long.

Lawmakers had earlier this year told Reuters they planned to redo the deliberation of the legislation to comply.

Bivitri Susanti, a constitutional law expert from the Indonesia Jentera School of Law, called the move “ridiculous” and “inappropriate” as it would cut debate time in parliament.

“Everyone can see there is no emergency. It’s holiday time,” she said.

“This emergency regulation is really a fait accompli from the president.”

An emergency regulation is usually effective immediately, but must receive parliament’s endorsement by the end of its next session to become permanent legislation.

Parliament is due to return from recess on Jan. 10 for what is typically a four-month session.

Among the biggest issues with the law were relaxed rules on severance pay, changes to the minimum wage formula, contract labour and outsourcing, and a stipulation that environmental studies be required only for high-risk investments.

The emergency regulation introduces some changes to that law to reflect trade unions’ demands, Airlangga said, including limiting outsourcing to certain sectors and adding a component for the formula used to set the minimum wage so that it would consider purchasing power.

The contents of the decree have yet to be made public.

Airlangga stressed the government had conducted more public consultations since the court ruling.

Chairman of the Labour Party, Said Iqbal, said he backed the emergency regulation because with general elections in 2024, parliamentary debate could be held up and at risk of being influenced by corruption.

He declined to comment on the content of the regulation but concurred that workers had been consulted by government officials and a business group over revisions in the law.

The party, formed in 2021 by members of several unions, had previously pledged to revoke the Jobs Creation law if they won secured enough votes in the 2024 election.