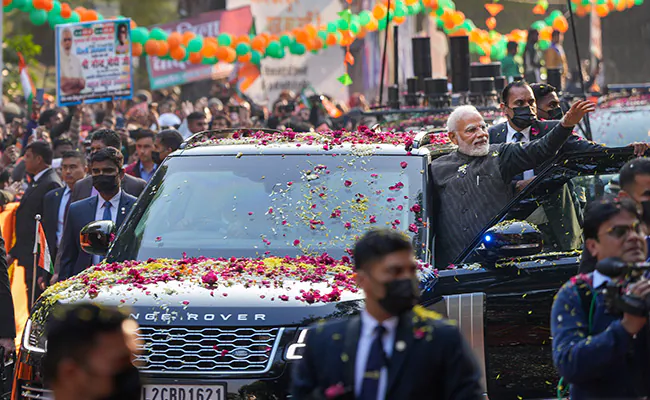 The world has now become aware of India’s strength and capabilities which were truly displayed during Covid and Russia-Ukraine war, the resolution said

The political resolution passed by the BJP national executive has showered encomiums on Prime Minister Narendra Modi, calling him the “supreme and the most popular leader of not only the country but also of the world” and asserting that India has emerged as a “protector of the world’s future” under his leadership.

India getting chairmanship of prestigious international organisations like G20 and Shanghai Cooperation Organisation (SCO) under Prime Minister Modi’s leadership has scripted “new chapters” in the country’s history, it said.

The whole world has now become aware of India’s strength and capabilities which were truly displayed during the Covid crisis and the Russia-Ukraine war, the resolution said, adding India leads the world when it comes to protecting humanity and conserving the environment and nature.

It said that under the “powerful and visionary” leadership of Prime Minister Modi, India has emerged as a decisive, far-sighted and strong nation, and as a protector of the world’s future.

“The National Executive of the Bharatiya Janata Party congratulates Prime Minister Narendra Modi, who is the supreme and the most popular leader of not only the country but also of the world,” the resolution said.

The BJP on Wednesday shared the resolution passed by its national executive, a key organisational body of the party, the two-day meeting of which ended on Tuesday. The resolution was first proposed on the meeting’s first day on Monday and was passed later.

Getting the presidency of three big international bodies like G20, SCO and United Nations Security Council in a single year shows the whole world recognises our country’s strength, it said.

From surgical strikes to issues around Pakistan and China, the Opposition’s propaganda fell flat every time, the resolution said.

“The life of fabricated allegations is not very long. For 20 years, the Opposition tried to defame respected Modi ji in the Gujarat riots case, but our supreme leader, bearing this humiliation like a ‘Neelkanth’, only focussed upon the development of the nation. The Supreme Court put an end to this propaganda by giving him a clean chit,” it said.

Results of assembly elections and by-elections show all Indians share a deep connect with Prime Minister Modi’s pro-poor welfare policies and innovative vision, it said, adding that the “Modi Magic” shattered all the records in Gujarat.

Accusing the Opposition of practising “bogus politics”, the resolution said it was rejected in the people’s court as well as the Supreme Court.

The party’s unprecedented scale of victory in the recent Gujarat assembly polls was the main highlight of the resolution, which described the result as a crushing defeat of the Opposition’s negative politics by giving the party its seventh win in a row.

“In the Gujarat elections, the Opposition, displaying their narrow-mindedness, used abusive words against the most popular Prime Minister ‘Hriday Samrat’ Narendra Modi.

“How could Gujaratis tolerate this? They taught a befitting lesson to such parties and such people in a democratic manner in the assembly elections,” it said.

In a swipe at its rivals, especially the Aam Aadmi party, without naming them, the resolution said the masses demoralised the typical “advertisers” of big claims and served them a crushing defeat.

“Those who used to talk about undercurrent and claim majority via media were given the answer that Gujarat did not trust such selfish and arrogant people and liars. The BJP’s stupendous victory in Gujarat is a victory for those committed to development and a defeat for those relying only on advertisement,” it said.

With the BJP winning 156 seats in the 182-member assembly and nearly 53 per cent of votes, the resolution said the party coming second could not even get the 10 per cent of total seats to be recognised as the main opposition party.

Like a true soldier of the party, Prime Minister Modi led from the front throughout the campaign and changed the whole atmosphere by conducting four roadshows and around 32 rallies. The resolution also praised the state leadership of Chief Minister Bhupendra Patel and party chief C R Patil.

“This is a victory that changed the political picture of the country. This resounding victory of the BJP in Gujarat is going to have a positive impact on the upcoming assembly elections as well as the 2024 Lok Sabha elections,” it said.

While the party lost to the Congress in Himachal Pradesh, the margin of defeat was less than one per cent, it said, adding that it also formed governments in Uttar Pradesh, Uttarakhand, Goa and Manipur last year.

“Under the successful leadership of the prime minister, the word ‘anti-incumbency’ is no longer used for the BJP but it’s pro-incumbency which is the buzzword.

“If the policy is correct, leadership is good and the intention is to genuinely work for the public, then words like ‘anti-incumbency become meaningless,” the resolution said.

With its “pro-poor welfare and development-oriented governments” in Madhya Pradesh, Karnataka, Tripura and Nagaland, the BJP is moving towards a big victory in these states, it said.

The public is “fed-up” with the Congress governments in Rajasthan and Chhattisgarh and the BRS government in Telangana.

The ‘Kashi Tamil Sangamam’ event in Varanasi and the ‘Har Ghar Tiranga’ campaign were also lauded in the resolution.