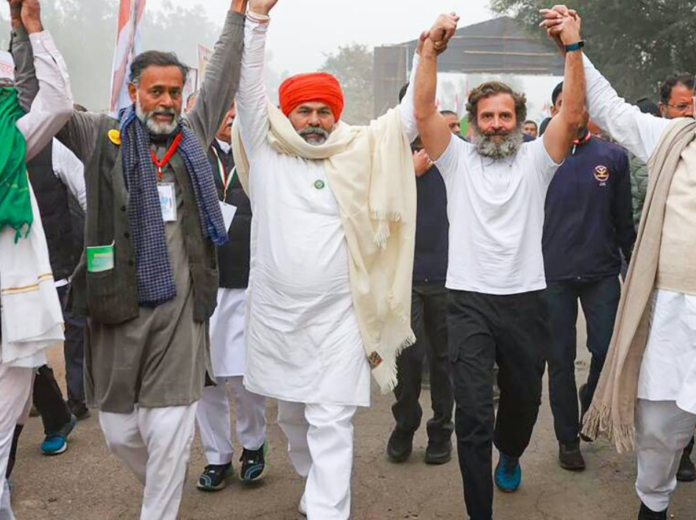 Addressing an unscheduled street-corner meeting marking the end of his Bharat Jodo Yatra’s fourth day in Haryana, Gandhi said it is the state where the Mahabharata was fought between Kauravas and Pandavas.

The Rashtriya Swayamsevak Sangh is “the 21st Century Kaurava” and whenever you see a RSS worker ask him to chant “Jai Siya Ram”, Rahul Gandhi Monday told the Congress workers as he launched a scathing attack on the right wing outfit and the ruling BJP-led dispensation.

Addressing an unscheduled street-corner meeting marking the end of his Bharat Jodo Yatra’s fourth day in Haryana, Gandhi said it is the state where the Mahabharata was fought between Kauravas and Pandavas.

The Congress leader also equated the Congress as Pandavas. “Kya Pandavon ne kisi gareeb aadmi ke khilaaf apraadh kiya tha? Kya Pandavon ne demonetisation kiya kya; notebandi ki thi kya; galat GST lagu ki thi kya? (Did the Pandavas ever work against the poor? Did they carry out demonetisation, implement wrong GST?) Would they have ever done so? Never. Why? Because they knew that demonetisation, wrong GST, farm laws are a way to steal from tapasvis of this land,” he said.

The Congress leader said that Prime Minister Narendra Modi did sign on the decisions such as demonetisation, and wrong GST but “hindustan ke 2-3 arabpatiyon ki shakti ne Pradhan Mantri ka haath chalaya”. He said the battle today is similar to the one that Pandavas fought against the Kauravas. “People don’t understand this, but the fight is the same today…On one hand there were these five tapasvis and on the other hand there was the ‘sangathan’ (organisation). With the Pandavas, there were people of all religions. Like this Yatra, where nobody asks anyone where they come from. This Yatra is a shop of love. The Pandavas had also stood against injustice, they too had opened shop of love in the market of hatred,” he added. Once again training guns on the RSS, he said RSS workers never say Har Har Mahadev. “Why? Because Lord Shiva is a tapasavi”.

He further said that during the course of his Yatra, he heard the salutation Jai Siya Ram. In Haryana, he said, he heard ‘Ram Ram’. “Yeh [RSS] Jai Siya ram kabhi nahi kehte. Inhone Sita ji ko naare se nikaal diya; utha ke bahar fenk diya. Yeh hamare itihaas ke khilaaf kaam kiya inhone. (The RSS workers never say Jai Siya Ram. They have removed Sita from the salutation. This is something that is against our history). I am telling you (Congress workers), every time you come across an RSS worker, ask them to say Jai Siya Ram. Kyunki, jitne jaroori Ram the; utni jaroori hi Sita ji thi (Because Sita is as significant as Ram),” he said.

He said it was not him who coined the slogan of opening the shop of love in the market of hatred. “Ye pandavon ka naara hai; ye bhagwan Ram ka naara hai. This country is doing tapasya and the government should respect it. I know that the day is not far when when India’s farmers, small businessman will get result of their tapasya”.

Referring to farmers who lost their lives during the agitation against now repealed farm laws, Gandhi said, “I said in Parliament that 700 people died…they should be given status of martyrs. Prime Minister said nobody has died. I observed two-minute silence. Speaker got angry. He said silence can not be observed for them. We know that they have martyred. Their families know they have martyred. But Government of India does not know it”.

Tikait said, “We spoke with him [Gandhi] on several issues pertaining to farmers and poor people. There are Congress governments in several states. We discussed the issues of farmers of such states so that the Congress governments can take care of such issues. We urged him that he should talk to the chief ministers of those states”.

Meanwhile, Gandhi also pitched for enhancing the skills and growth of small and medium industry. “If you see on the back of your mobile phones, ‘Made in China’ is written. The same is written on the shoes worn by policemen. I am fed up with this “Made in China”, “Made in China”. I want that a youth in Beijing holds a phone with ‘Made In Kurukshetra’ written on it,” he said. The Yatra will enter Punjab from Ambala’s Shambhu barrier on Tuesday evening.