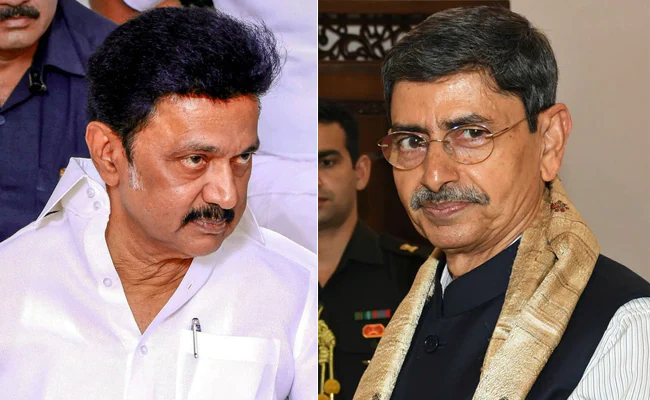 “But Governor Ravi is maintaining a politically ideological conflict with the Tamil Nadu government which is completely contradictory to our Constitution,” the statement in Tamil quoted him as saying.

Tamil Nadu Governor RN Ravi was engaged in a “political ideological conflict” with the state government, and he should be advised against doing so and asked to abide by Cabinet directions on various matters, Chief Minister M K Stalin has urged President Droupadi Murmu.

A state government release here mentioned the key points highlighted by the CM to the President in the letter, which was handed by a Law Minister S Regupathy-led delegation to her in New Delhi earlier in the day.

Detailing the developments of January 9 where the Governor deviated from the government prepared address of his to the state Assembly, Mr Stalin has told her this was against the traditions of the House.

The release further said that while Mr Stalin informed the President that the office of the Governor was a “high one” and all accorded due respect to that, the person in the gubernatorial post should be above politics.

“But Governor Ravi is maintaining a politically ideological conflict with the Tamil Nadu government which is completely contradictory to our Constitution,” the statement in Tamil quoted him as saying.

He was opposed to the culture, literature and equitable politics of Tamil people and could not accept concepts like Dravidian policies, equality, social justice and rational thinking being followed in Tamil Nadu, Mr Stalin said.

Mr Ravi was speaking against Tamil culture, literature and social system in public fora and the January 9 incident was an extension of this, he alleged.

Article 163 (1) of the Constitution says the Governor should abide by the recommendations of the council of ministers.

He had no right to deviate from the speech prepared by the government for his address, Mr Stalin said, adding the parts he skipped were the names of late stalwarts Dr BR Ambedkar, EVR Periyar, CN Annadurai and M Karunanidhi and terms including social justice, self-respect and Dravidian model of governance.

A man in a such a constitutional post doing so and disrespecting was ‘regrettable’ and the CM had to, therefore, bring in a resolution against the deviations, the letter read.

Mr Stalin urged the President to uphold federalism and protect the ethos of the Constitution, the release said, adding he also flagged Mr Ravi’s pending assent for various Assembly bills which affected governance.

Tamil Nadu was a state that welcomed all and practiced unity in diversity, but Mr Ravi was speaking against these.

“The CM has requested the President to intervene in the matter and direct Ravi to act according to cabinet recommendations, as mandated by the Constitution, enabling good governance for the public,” it said.

Further, Mr Stalin requested her to advise Mr Ravi not to maintain an “ideologically conflicting stand”.

The letter was written to the President with an intention to ensure cordial relations between important institutions in the democracy and they being able to perform their functions, the release quoted Mr Stalin as telling the President.

He also hoped of a positive outcome as a result of her efforts.