HomeNews‘I would definitely be reaching out to Mahi’: Graeme Smith on taking...

‘I would definitely be reaching out to Mahi’: Graeme Smith on taking MS Dhoni’s help in SA20 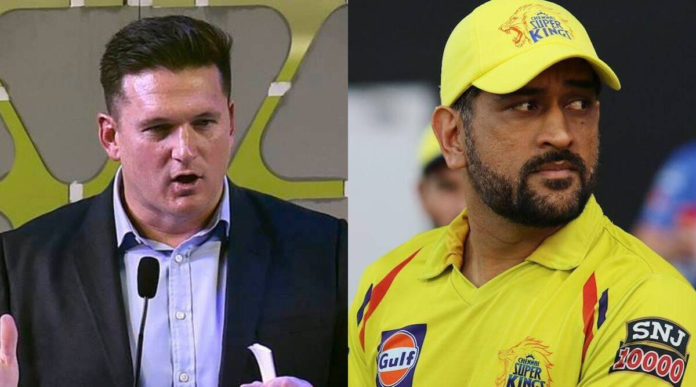 Cricket South Africa’s SA20 Commissioner said at a select media engagement said it would be amazing to have a player like Dhoni participating in the SA20 league.

Cricket South Africa’s SA20 Commisner Graeme Smith said it would be amazing to have Mahendra Singh Dhoni in the SA20 league on Friday.

Smith who was speaking at a select media engagement said, “It would be amazing to have a player like him(Dhoni). But as I have previously said, we always work with and respect the BCCI. The fact that we have created such a nice working relationship with them and have been able to talk to them and learn from them.”

“I mean, they are hugely experienced in doing such events like the IPL or the World Cup. And it is a very important relationship to have for the SAT20. From our perspective, we looked at it, we have one or two opportunities,” Smith added.

Smith acknowledged that having someone like Dhoni would increase the value of the SA20 league, “But one thing we really wanted to build was a young and vibrant and really competitive cricket league. And someone like an MS would of course add a lot of value to our league.”

“He has been able to perform and maintain performance for a very long time in this profession and would bring a level to the league which we will be proud to have. But if there is ever an opportunity I would definitely be reaching out to Mahi,” he further added.

Though MS Dhoni has retired from international cricket the veteran continues to be part of four times IPL champions Chennai Super Kings. However, for a player to participate in foreign leagues they have to break all the ties with the BCCI.

Share
Facebook
Twitter
Pinterest
WhatsApp
Previous article
‘If you are looking for only slim and trim guys, go to a fashion show’: Gavaskar lashes out at selectors for ignoring Sarfaraz Khan
Next article
“If He Was Such A Big Gun…”: Kamal Nath’s Jibe At Jyotiraditya Scindia