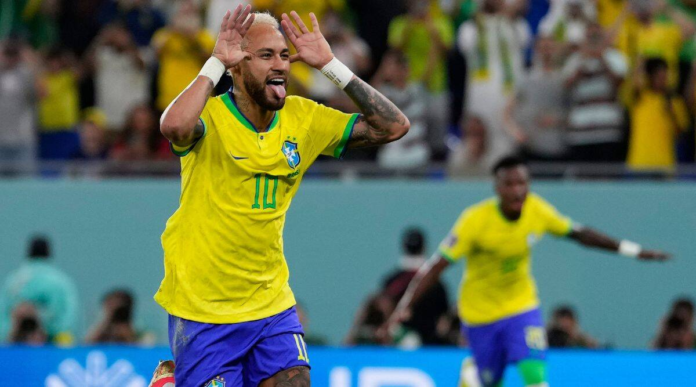 Neymar has dedicated his goal to injured team-mate Alex Telles, who is out of the world cup.

When photos of Neymar’s swollen right ankle emerged, it seemed his world cup was over. He had suffered damaged ligaments during Brazil’s 2-0 win in their opening against Serbia. But a miraculous race against time, with physiotherapists working on him through nights, got him on the field against South Korea where he slotted in a goal.

“I spent the nights crying a lot, my knows, but everything worked out. It was worth it, it was worth the effort. Having stayed until 11 am that day (morning of South Korea) treating with the physiotherapist, and on other days until 5 am, 6 am,” Neymar told reporters after Brazil’s 4-0 drubbing of South Korea.

“All the suffering is valid so that we can crown a title”, said Neymar.

“For sure, there was a lot of fear (about the injury). I was coming off very well, after a very good season and suffering an injury like I did is very hard. When I got hurt, a thousand things went through: doubts, fears… and I had all the support from my teammates and family. I received good messages, sending good energies. That comforted me a lot. Thank you for those who prayed, I send a message. I can’t thank you. Now I’m going to do everything for the team to win, I’m here with this mission”, he said.

He also dedicated his goal to team-mate Alex Telles, whose injury has put him out of the world cup.

In an emotional Instagram message, Telles wrote: “Paths are not straight, they have bends, not every moment in life is joyful, but the bright side of it (and we absolutely always have the counterpoint to sadness) is that after the cry, it’s time to smile. I always had a childhood dream, which was to defend my country in a World Cup. And that dream, you can be sure, did not end here.

“My dream remains inside every teammate who will enter the field in the matches until the end of the World Cup. My dream follows inside every fan who screams for our country in the stands. Because this dream was never just mine, it has always been a dream of all those who love Brazil and live intensely football.

“I follow by heart and fan from now on. In fact, I still feel as I’ve always felt: a Brazilian who never gave up dreaming. I made a drawing as a kid that showed everything I wanted and actually ever wanted in my life.

“Before the match against Cameroon, I looked at that drawing and asked God to let his will be done. And this is how I’m dealing with every minute since I left the field. Nothing comes without a purpose in our lives. And with the same will of that child who drew his dreams, I will follow my path. Thanks everyone for the love. I will come back even stronger!!!!! THE DREAM CONTINUES.”