HomeNewsHow France were prepared for the noisy Moroccan support & their wall... 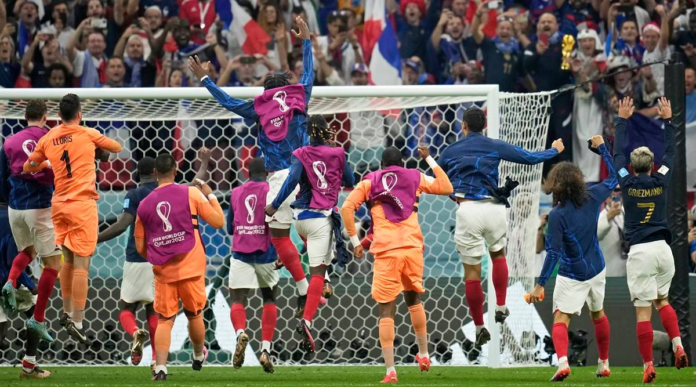 France manager Didier Deschamps had his players prepared for the “loud support” Of the Atlas Lions at Al Bayt Stadium.

Moroccan fans brought the most piercing, opponent-shushing whistle acoustic and charming chants through their wall of echoing sound to the World Cup. It was this 12th player on the field that France had consciously prepared for, ahead of their semifinal.

Captain Hugo Lloris, who preaches caution at all times and hasn’t allowed the holders to take any opponent lightly, had said France was prepared for the audible reception from a large crowd not in their favour, after the red & greens had packed off
Belgium, Spain and Portugal en route the last four.

“It will be a hostile atmosphere inside the stadium, but we are ready for anything,” Lloris was quoted as saying by BBC ahead of the semis.

“Obviously, it is already a success for Morocco – but, believe me, they won’t want to stop here. They want to become even more of a hero for their country. We prepare to respond to the demands of a semi-final of a World Cup – it doesn’t matter the opponent,” Lloris had added.

BBC said France manager Didier Deschamps had his players prepared for the “loud support” Of the Atlas Lions at Al Bayt Stadium.

“I don’t like the term hostile for the environment because that is negative,” BBC quoted. “They have great support, which is useful to them. It is very noisy and my staff have told the players about that. It is not going to score you goals, but it is great to have such loud support,” he reasoned.

“When you prepare for a match you have to prepare for the atmosphere – my players know what to expect.”

Earlier before the French had sent home England, the realisation had kicked in that any team could be kicked out. RMC quoted the “stupor of the elimination of Brazil” – the shock felt by the French watching the Canaries lose ahead of their own quarterfinal.

RMC would describe how all the players gathered in a room for haircuts were stung by the Brazil result. “The players are surprised by the elimination of Brazil earlier in the day and the subject naturally invites itself into the discussions. The distress of Marquinhos challenges several players: “He does not deserve this”, launches his teammate at PSG Kylian Mbappé,” RMC wrote. “After Argentina’s sluggish qualification, the moral of this evening: no resting on one’s laurels. Everyone can be eliminated. The proof with the prestigious teams which have already packed their bags: Germany, Spain or even Brazil.”

Typically, France’s video analysts Eric Dubray and Thierry Marszalek help Deschamps draw up a plan which he goes over on a blackboard.

French players have been encouraged to speak in the locker room, with a few rousing speeches already part of their 2022 folklore. RMC added: “Raphaël Varane, whose speech had marked the spirits during the match against Poland, will have a word for his teammates. Olivier Giroud also and, more surprisingly because he is not used to it, Antoine Griezmann will also speak. The Atlético de Madrid player is smiling again. At the end of the match, “Grizi” is one of those who make themselves heard the most, with a mic in his hands. The Gala song “Freed from desire”, the anthem of the Blues, resonates very strongly in the locker room.”

While the French president was seen watching the French in their semis, preceding games had Minister of Sports Amélie Oudéa-Castéra stand on an irom trunk to make a speech, as per RMC.

In the leadup to the semifinal, Lilian Thuram passed was overtaken by Hugo Lloris for most number of games – 143. Claude Makelele, 2006 world vice-captain would also accompany the squad.

“A party atmosphere continued to the Al Messila hotel, base camp of the Tricolores after the England win. The hotel staff prepared a guard of honor,” RMC said. Antoine Griezmann had even climbed on a small fountain located in the lobby of the hotel while dancing after the English win. In the semis, the King of Assists would follow up with a performance worthy of another jig.