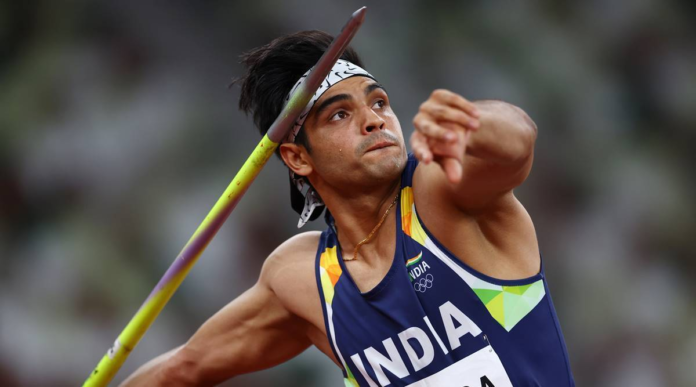 After the historic gold in Tokyo, the 24-year-old Olympic champion javelin thrower has continued to raise expectations with a silver at the World Championships, before adding another feather in his cap by winning the Diamond League Finals gold.

His athleticism has left even the iconic Michael Johnson in awe recently and India’s Neeraj Chopra has now set himself a target in the new year: breach the 90-metre mark with his javelin.

After the historic gold in Tokyo, the 24-year-old Olympic champion javelin thrower has continued to raise expectations with a silver at the World Championships, before adding another feather in his cap by winning the Diamond League Finals gold.

However, despite his superlative shows, the magical 90m mark continues to elude him.

“In this new year, I hope I will put an end to this question,” Chopra told reporters in a video interaction from England where he’s doing off-season training.

He came agonisingly close with his 89.94m throw when he finished second in the Stockholm leg of the prestigious Diamond League.

In hindsight, Chopra thinks he could have achieved the mark in Stockholm.

“I could have done that if I landed my foot a few centimetres ahead.” “Yes, it’s just a matter of six centimeters — but a magical mark for an athlete. Whenever you talk about a top athlete we all say like this he’s done 90m.

“I don’t think much about the expectations. Yes, you have to handle both your own and others’ expectations. But when I’m competing, my mind goes blank.

“It’s about giving it your all, your 100 percent thinking that you have prepared for just this day. And somewhere these expectations from the people who love me play a positive part.” The penultimate year before the Paris Olympics has a host of important events lined up, including the rescheduled Asian Games in Hangzhou, and Chopra said they are yet to take a call on when to start preparations.

“About when to start, I have not thought about it. I will plan with the coach assessing the situation in China. If it happens as per schedule in October, we may start the season a bit late so that we can stretch it till the Asian Games.”

Keeping that in mind, Chopra is just focused on strength building exercises in the indoor training in England and when they shift their training base to South Africa he would switch to javelin throws.

“I’m mainly doing shoulder strength exercises. Lifting heavy balls, weighing about 8-10kg for building power and strength. I’m also throwing heavy balls of about 1.8-2kg. From our next camp in South Africa, where the weather is also good we can start with the javelin.”

An injured Chopra could not defend his gold at the Birmingham Commonwealth Games owing to an injury but his compatriots, such as long jumper Murali Sreeshankar and steeplechaser Avinash Sable, clinched historic silver while competing among the world’s top pool.

Also triple jumpers Eldhose Paul and Abdulla Aboobacker had a top two finish as India achieved their second-best medal haul after the 2010 Delhi CWG with one gold, four silver and three bronze.

Chopra believes Indian athletics is on the rise and hopes to see more glorious days ahead.

“In world athletics, our men’s field ranking is 9, it’s a good thing. I think we will do better as athletes.” “Whenever I talk to anyone, I feel they are all positive and clear in their mindset. The likes of Sreeshankar, Eldhose, Sable, they no longer go just to participate, they go to do their best and compete among the top. I don’t think I’ve anything more to offer them. I have full faith in them,” he signed off.