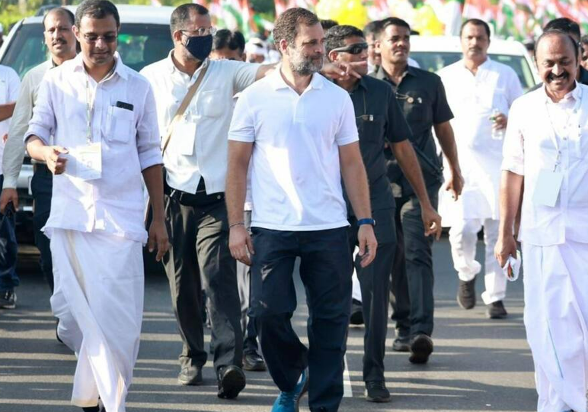 Cong president’s food choices were among the issues on which party and CPM crossed swords.

As Rahul Gandhi concluded the Kerala leg of the Bharat Jodo Yatra in Malappuram district Thursday, he took to Twitter to thank the people of the state.

“Home is where you get love, and Kerala is home for me. No matter how much affection I give, I always get more in return from the people here. I am forever indebted. Thank you,” he wrote.

But the yatra was not all smooth-sailing. The ruling CPM and the Congress took every opportunity to hit out at each other. And, lately, at the centre of this back-and-forth was parotta.

Last week, as pictures emerged of Rahul Gandhi with chai and a plate of food in front of him, the CPM punned on the menu to say the Congress should focus on other things on his plate.

The CPM’s youth wing DYFI put up a poster, which showed Rahul eating parotta (later shown to be doctored) in Thrissur’s Puthukkad and said: “porattamanu badal, prottayalla (the struggle is the remedy, not porotta)”. Congress workers went on to vandalise the poster, but that only spurred the Left outfit to put up similar posters at various spots the yatra passed through.

As the posters kept springing up, the Congress came up with its own to assert that its point of focus was the BJP and the RSS. Its choice of caption was “Aradhakare Shantharakuvin, porattam RSS-inodanu (Dear fans, be calm. The struggle is against the RSS).” Congress leader and former MLA V T Balram also shared a picture of a crowded CPM party office with members watching the Congress march near the poster.