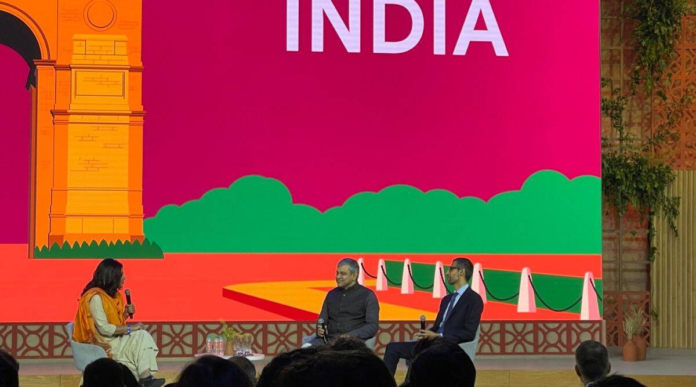 Google showcased a number of new features aimed at making accessing the internet easier for Indians, with a sharp focus on the use of artificial intelligence.

At its annual Google for India event, the technology giant showcased a number of new features aimed at making accessing the internet easier for Indians, with a sharp focus on the use of artificial intelligence. Google is also bringing better safety features to Google Pay– its popular digital payments app in the country- and integration for the Files app with the government’s Digilocker service. Google’s event also saw the presence of its CEO Sundar Pichai along with Ashwini Vaishnaw, Minister of Railways, Communications and Electronics & Information Technology for the government of India.

“I think artificial intelligence will touch every sector over time. I’m most excited at how we can use AI in the service of our mission at Google. We are increasingly using AI to scale up the number of languages we can offer. We are now working on one powerful AI model to support 1000 languages. AI will help us in being able to bring a multi-modal view to Google Search,” Pichai said as part of the discussion.

For starters, Google is collaborating with the Indian Institute of Science, Bengaluru for Project Vaani which aims “to capture diverse Indian dialects for building better AI language models.” The project will see the collection and transcribing of open-source speech data from across all of India’s 773 districts. This will be made available through the Government of India’s Bhashini project in the future. Google also plans to build a “single, unified model, capable of handling over 100 Indian languages across both speech and text.”

The company also showcased new search features. For one, Google’s Multisearch feature — which allows users to search using images and text simultaneously– will come to more Indian languages in the next year starting with Hindi first. The feature is currently available in English in India. It is also introducing an India-first feature where search results pages will be bilingual for users who prefer this.

Google says it will rely on its “advanced Machine Learning-based translation models” and “a cross-language search technology,” for this. This functionality has already started rolling out in Hindi and will be expanding to other Indian languages, including Tamil, Telugu, Marathi, and Bengali, in the coming year.

It also plans to improve speech recognition technology for Hinglish speakers. The new model can “more effectively understand people who speak in Hinglish,” according to Google, as it uses a new “neural-network inspired speech recognition model that takes into account the individual’s accents, surrounding sounds, context, and speaking style.”

The company is also partnering with the National eGovernance Division (NeGD) to enable people to access their verified digital documents in the ‘Files by Google’ app on Android by integrating with Digilocker. Google says the “documents stored in Files by Google will be in an isolated environment on the device, and can only be accessed using a unique lock screen authentication.” The Files app will also be able to identify one’s government documents and organise them into a single folder, which will be secured. The algorithm will be able to identify one’s PAN card, Aadhaar card data as well from the documents stores on the Files app. Google says the machine learning algorithm runs on the device itself for enhanced privacy and security.