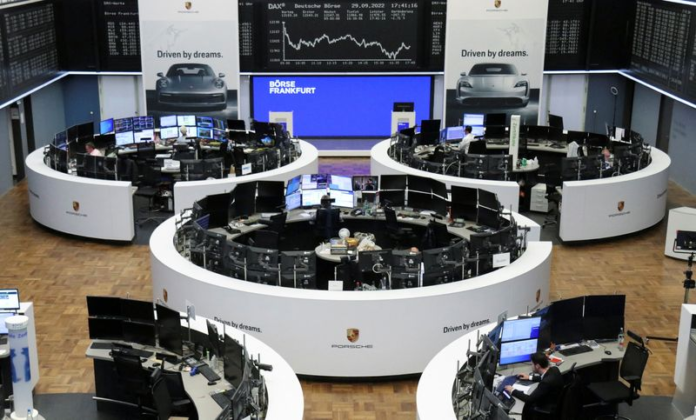 (Reuters) -European stock indexes climbed on Friday, the last trading session of a painful quarter, hit by worries about the impact of aggressive policy tightening measures by central banks on economic growth and corporate earnings.

The region-wide STOXX 600 index was up 1% by 0810 GMT, led by bargain hunting in beaten-down shares of retailers, oil and gas companies, and banks, rising between 1.8% and 2%.

The index was down 5% for the July-September period and set to notch its third straight quarterly decline in what will be its longest such losing streak since 2011. For the month, it shed 6.8%.

The market has been under pressure since the Russia-Ukraine war earlier this year jolted the region and sent gas prices soaring, leading to rampant inflation, which sparked concerns about a recession due to central banks delivering hefty rate hikes.

“We have got a huge reevaluation of asset prices and the markets down at year lows, that is just pushing investors to take a look at some of these new levels on offer,” said John Woolfitt, director-trading, Atlantic Capital Markets.

“There’s a tug of war going on in the market at the moment. One side is bargain hunters looking at prices not seen for a while and the other side is just rebalancing portfolios to ensure that in this new sort of era, certain assets aren’t still being held.”

Data earlier in the day showed the Netherlands’ inflation jumped to 17% in September, its highest in decades on skyrocketing energy prices.

All eyes are on September eurozone inflation data due at 0900 GMT that will likely strengthen the case for another 75 basis point rate increase by the European Central Bank in October. German inflation accelerated to 10.9% this month, exceeding market expectations.

Russian President Vladimir Putin is set to host a Kremlin ceremony on Friday annexing four regions of Ukraine, after what Kyiv and Western countries said were sham votes staged at gunpoint.

Italy’s Webuild rose 1.9% after the builder said it expected its commercial results for the year to “significantly exceed” guidance.

Shares of German sportswear makers Puma and Adidas (OTC:ADDYY) slid 5.1% and 4.1%, respectively, after U.S. rival Nike Inc (NYSE:NKE) cautioned that gross margins would remain under pressure through the year due to ramped up discounts and a rapidly strengthening dollar.