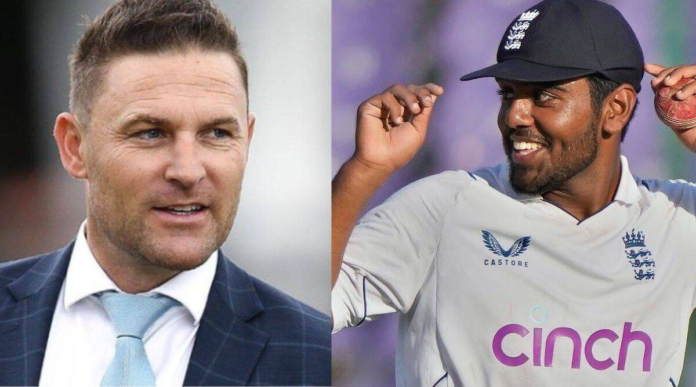 ECB are encouraging teen googly sensation Rehan Ahmed to take a plunge in the IPL auction, with his county and Test coach Brendon McCullum keen that he hoardes experience of global franchise cricket. The star of England’s 3-0 whitewash of Pakistan, the leggie has been asked to accumulate experience in white ball cricket under different coaches and franchises, to add to his limited overs skillset.
According to Sky Sports, “Rehan Ahmed has opted to keep his name in Friday’s Indian Premier League action after being encouraged to do so by England; Ahmed took a five-wicket haul against Pakistan after becoming England’s youngest men’s Test cricketer.”

The fortunes of England’s youngest men’s Test cricketer who took a five-for on debut, are being followed closely by his board, with Sky Sports calling his story “an updated version of a Craig David classic but it’s not. It’s the week Rehan Ahmed is hoping to experience, with those Test-match records potentially followed by a lucrative T20 gig.”

Appearing on a long list of English players in the fray for Friday’s auctions, Ahmed, 18, alongside Test skipper Ben Stokes, former captain Joe Root and the in-form Harry Brook are amongst the names.

Sky noted that the Leicestershire lad could be an attractive proposition, despite the fact overseas spinners are rarely top of IPL franchises’ shopping lists. “For one, Ahmed won’t cost a fortune. He has a base price of 50 lakh (around £50,000), which despite being elevated from 40 lakh (around £40,000) after his Test debut, remains very reasonable. He showed in Pakistan that he has a terrific googly, a decent leg-spinner and a fine temperament. After a nervy start, the teenager grew in confidence and seemed to relish the big occasion.”

England captain Stokes was quoted by Sky Sports Cricket as saying: “What I was impressed with is that the more Rehan got into the game, the more confident he got in himself to talk to me about fields.For him to have the ability he has but be nowhere near the finished article is exciting. I am not sure what is better, his batting or bowling.”

Coming in at No 3 in the second innings of the final Test against Pakistan, Ahmed struck two off-side boundaries before being bowled hacking to leg. “He played a more sustained innings for Leicestershire against Derbyshire in September, hitting a County Championship century in the same game he bagged a five-for. Ahmed is also a livewire in the field so should any IPL side take a punt on him, they will get a three-dimensional cricketer,” Sky added.

Leicester might’ve been reluctant initially, but PA news agency said on Wednesday that working closely with the England and Wales Cricket Board over the youngster’s schedule in the past year, the county were initially expecting him not to take part in this year’s tournament and to start the LV= Insurance County Championship season with them in April instead. “The county are supportive of Ahmed’s decision to remain in the auction, but while that route was under discussion, with one eye on developing Ahmed’s red-ball skills ahead of a potential role in next summer’s Ashes, the decision was made to keep him in the frame for a contract, with the Pakistan Super League no longer being considered,” Sky wrote.

England head coach Brendon McCullum was quoted by BBC’s Test Match Special as saying, “It would be awesome if [Ahmed got an IPL contract]. Why not get an opportunity to go and play under different coaches and different captains, rub shoulders with different players, pick up those experiences?

“What 18-year-old kid anywhere else in world cricket is going to get those chances? I think we should encourage it. He won’t be in every [England] squad and I’ll encourage him to play as much franchise cricket as he can, get as many experiences around the globe.

Hales not in it

7 England players are already confirmed in IPL, retained by their respective franchises for the 2023 competition, which is scheduled to run from March 26 to May 28.

“England’s limited-overs captain Jos Buttler (Rajasthan Royals) and his vice-skipper Moeen Ali (Chennai Super Kings) will both participate. Also retained were Mark Wood (Lucknow Super Giants), Jofra Archer (Mumbai Indians), Jonny Bairstow, Liam Livingstone (Punjab Kings), and David Willey (Royal Challengers Bangalore). Chris Jordan, Jason Roy and Tymal Mills featured in the 2022 competition but were not retained by their franchises, and the trio are among 27 English players, including Ahmed, who are hoping to be selected on Friday.”

Test captain Stokes, part of the World Cup winning side last month, is set to return to the IPL after opting to sit out last year’s tournament. “Also likely to generate significant interest are England’s all-format batting star Brook and T20 World Cup player of the tournament, Sam Curran. England’s senior limited-overs spinner, Adil Rashid, is available, along with fellow international regular Dawid Malan. Other recent members of the England team such as Phil Salt, Reece Topley and Will Jacks are also in the auction. A notable absence is T20 specialist Alex Hales,” Sky wrote.

Hales apparently said he is “sitting out the tournament to focus on international commitments following his return to the England set-up.”