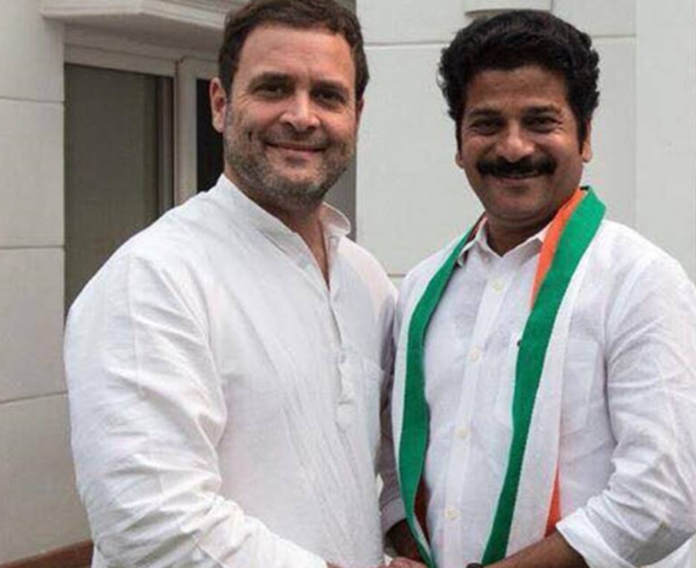 TPCC president Revanth Reddy under fire for not taking senior leaders into confidence and for making “unilateral decisions”.

While the senior leaders are once again upset with Revanth Reddy and are seeking his ouster, according to sources, the All India Congress Committee (AICC) is strongly backing the Telangana Pradesh Congress Committee (TPCC) president and is reluctant to make any leadership change in the state where elections are due next year.

In 2018, Chief Minister K Chandrashekar Rao had advanced the Assembly polls to December 2018 instead of the polls scheduled in May 2019.

Digvijaya Singh, an old-time troubleshooter in united Andhra Pradesh, will now find himself wading into a tricky situation. He faces the same cycle of ego wars and one-upmanship that has afflicted the TPCC ever since Reddy was appointed as state unit president in June 2021. Factional feuds in the state unit have deepened and there is a wide chasm between the various groups that AICC leaders have failed to bridge.

Reacting to this accusation, at least 12 PCC members quit their posts but the AICC has not accepted their resignations. “The feeling among loyal Congressmen is that posts have been given to persons who have come from other parties like the Telugu Desam Party (TDP) while ignoring the original Congressmen. We are not asking anyone to resign. We are merely pointing out what is going on,’’ Vikramarka said.

Revanth Reddy; Mulug MLA Danasari Anasuya, popularly known as Seethakka; and former TDP MLA Vem Narender Reddy, among others, are former TDP leaders who have joined the Congress in the past few years. “We do not want the senior Congress leaders to feel sidelined or ignored. We do not want these posts at the cost of infighting in the party, so we quit. We have appealed to everyone that we should stay united if we have to put up a fight against the BRS (Bharat Rashtra Samithi) and the BJP. People are fed up with the BRS government and are looking at the Congress as an alternative. This is not the time to fight among ourselves, instead we should be going to the people,’’ said Vem Narender Reddy.

Asked about the controversy, Revanth Reddy recently said, “I have assured the senior Congress leaders that all their grievances will be looked into and resolved. The AICC is looking into it.”

The miffed state Congress leaders have also found fault with Telangana in-charge Manickam Tagore, saying that he was unsuccessful in conveying their dissent against Revanth Reddy to the party high command. Tagore has expressed his frustration several times over this deadlock as neither side is willing to yield an inch.

“Everytime this issue is discussed, Revanth Reddy promises to discuss and confide with senior congress leaders in the decision making process but acts unilaterally. Senior Congress leaders agree to cooperate and work with Reddy but refuse to talk to him. This is how it has been going on,’’ said one state Congress leader.

Congress insiders said that every time the anti-Revanth Reddy camp raises the issue, the AICC mollycoddles them and assures them of action and they pipe down. “Revanth gets a rap, he promises to mend his ways but remains adamant, and everything is back to square one,’’ one leader said.

“None of the seniors are able to work with Revanth Reddy because he does not involve anyone except his loyalists,’’ said Hanumanth Rao. Revanth Reddy recently announced that the party would launch a state-wide padayatra from January 26 but none of the seniors were taken into confidence and they skipped his “haath se haath jodo (join hands)” programme on December 18 to prepare for various Congress programmes, including the padayatra.

In such a situation, how much Digvijaya Singh can do remains to be seen as, sources said, the high command considers Revanth Reddy to be the best person to lead the organisation in Telangana. This impression that he is a strong leader was further strengthened when Reddy recently took on Union Finance Minister Nirmala Sitharaman in Parliament.

On December 10, in a major overhaul of TPCC approved by Congress president Mallikarjun Kharge, the party set up a political affairs committee and executive panel and gave important positions to all the leaders. The party appointed 24 vice-presidents and 84 general secretaries and some of these appointments were the source of anger among the senior Congress leaders.

The Political Affairs Committee is headed by Tagore, who is its chairman. The committee includes Revanth Reddy, V Hanumantha Rao, Uttam Kumar Reddy, T Jeevan Reddy, Renuka Chowdhury, and Madhu Yakshi Goud. The overhaul comes at a time when the Congress has been pushed back by the BJP as the main Opposition party. The loss in Munugode by-election in November where the Congress candidate lost her deposit was an eye-opener for the party. In two other by-elections – in Dubbaka and Huzurabad which were won by the BJP – the Congress was relegated to the third position. In the 2018 Assembly elections, thd Congress won 19 seats but due to defections it has now been reduced to just five MLAs.