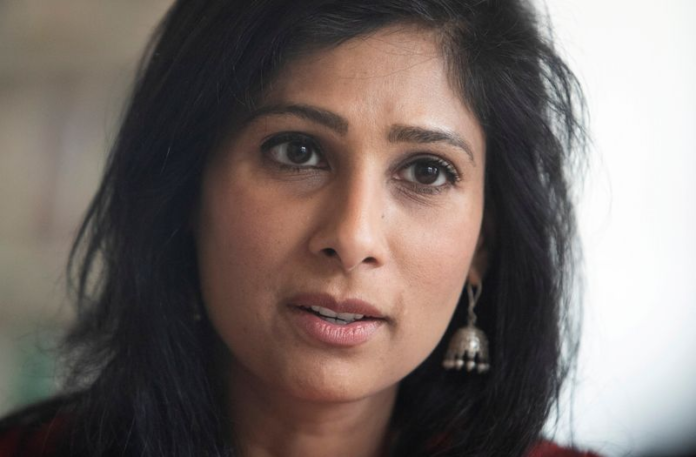 DAVOS, Switzerland (Reuters) – China could see a sharp recovery in economic growth from the second quarter onwards based on current infection trends after the dismantling of most COVID-19 restrictions, IMF Deputy Managing Director Gita Gopinath said on Wednesday.

Speaking to Reuters on the sidelines of the World Economic Forum in Davos, Gopinath also reiterated the Fund’s calls for nations to avoid a descent into protectionism.

She hailed China’s reopening as a positive sign, alongside indications it was ready to re-engage with the world.

“We expect growth in China to come back, to rebound,” Gopinath told Reuters in an interview.

“Looking at the infection trends, and if those persist, we could see a very quick recovery starting from after the first quarter of this year,” she said of a current surge in infections seen as an “exit wave” linked to the economic reopening.

China’s economy grew 3.0% in 2022, one of its worst economic performances in nearly half a century, hit by strict COVID curbs and a property market slump.

Economists polled by Reuters see Chinese growth in 2023 at around 4.9%, with some of them recently upgrading forecasts to around 5.5%.

Gopinath said that a growth rate “in the 4%-plus ballpark” would likely mean that any global inflationary pressures would be counter-balanced by the slowdown in demand elsewhere.

“But if growth in China comes in much more strongly, which is a possibility, then we could see another spike in oil prices or energy prices,” she said.

Asked about recent U.S. inflation readings that suggest a cooling, Gopinath said it was too early to say for sure whether they meant that inflation was heading durably back down to the U.S. Federal Reserve’s target of 2%.

“If we get readings similar to what we saw in the last month or two for another few months then we’ll be in a good place,” she said, noting that the labour market remained tight.

Gopinath reaffirmed the Fund’s concern that geopolitical tensions would lead countries towards protectionism as they tried to shore up their economic security.

Asked about the U.S. Inflation Reduction Act package of measures to boost green transition investment, she said it treated electric vehicles in a discriminatory way by favouring U.S. producers over other manufacturers.

Washington said on Tuesday it was trying to address European concerns over the $369 billion plan.

“The administration of the U.S. is rethinking this and thinking of ways for it become less discriminatory,” said Gopinath. “Our only request would be for it to do this for all your partners and not just a subset of them.”

Share
Facebook
Twitter
Pinterest
WhatsApp
Previous article
Argentina to buy back $1 billion in foreign debt in signal to markets
Next article
Tesla Full Self-Driving: What is it, how it works, and why it’s controversial