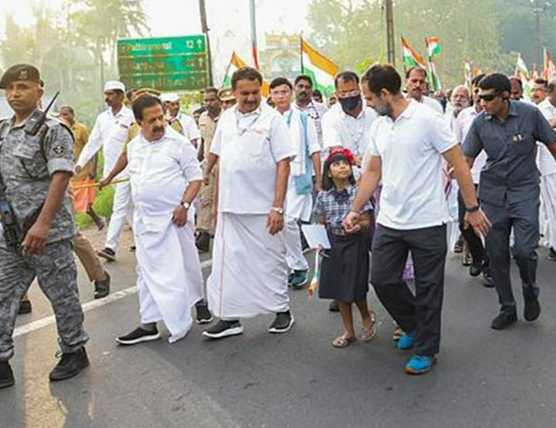 Congress leader Rahul Gandhi on Tuesday said the idea behind Bharat Jodo Yatra is to make it clear that India has refused to be divided.

He alleged that China has entered Indian territory because the country has been weakened. “The opponents from outside the country can see what is going on in the country. They can see India is divided, India is full of hatred and they can see the arrogance of our leadership. We have a situation where the Chinese have occupied our land, but the PM does not accept. Chinese are sitting on Indian land the size of Delhi. This is reality and truth. Because, India has been weakened,’’ he said.

He said that people who lead the country spread hatred: “Listen to their speeches. There is not a single speech in which they speak about love, affection and humility.”

Earlier in the day, referring to the huge turnout of people along the yatra route, senior Congress leader Jairam Ramesh said, “For Rahul Gandhi, the yatra is a tapasya. It is like a tapasya yatra. The response of the people is in the form of bhakti (devotion).’’

He said the response has been more than what the party expected. “Even people who do not usually vote for Congress have come out in support of yatra. The response is tremendous. The drama between Kerala Governor and the Chief minister is an attempt to divert attention from the yatra. CPI(M) is functioning as an A team of BJP in Kerala,’’ he said.

Ramesh said since the yatra began at Kanyakumari, the yatris have completed 285 km within 13 days. “Every day on an average, the yatris walk 20 to 21 km. The average age of the 120 group of yatris is 38,” he said.

On Tuesday, the 13th day of the yatra, hundreds of workers from the hilly district of Idukki joined Rahul. He met a delegation of Nationalist Congress Kerala, a faction of NCP, which is with Congress-led UDF in Kerala. A tribal leader, Kovil Mala Rajamannan, visited Rahul to express his community’s support for the yatra.

On Wednesday, the yatra would enter Ernakulam, the home district of Opposition leader V D Satheesan. The yatra could continue in Kerala for 18 days till it enters Tamil Nadu via Nilambur in Malappuram on September 29.

At Narasimha Swami temple at Thuravoor in Alappuzha, Rahul met Peruvanam Kuttan Marar, who is the chenda (traditional percussion instrument) maestro of Kerala. Marar and his team staged a chenda melam (percussion) for Rahul and his entourage. Rahul also tried his hands on chenda, before resuming the yatra.