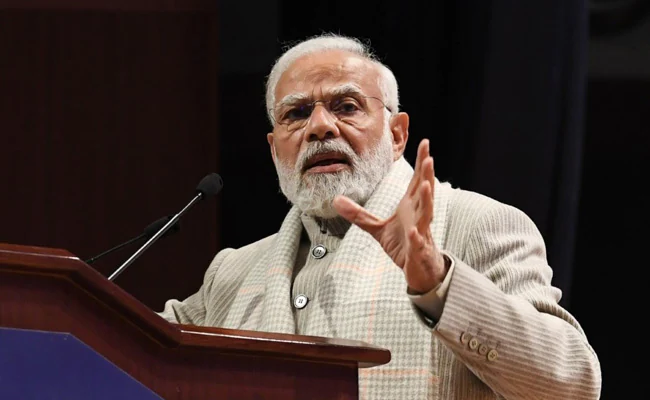 Tensions prevailed in some areas of Kerala including the state capital where police had to use water cannons and tear gas to disperse Yuva Morcha protestors.

The controversial BBC documentary on the 2002 Gujarat riots when Prime Minister Narendra Modi helmed the western state was screened across Kerala on Tuesday by various political organisations including the pro-Left Students Federation of India (SFI), as the BJP youth wing went up in arms protesting against the screening.

BBC’s “India: The Modi Question” was screened in several parts of the state on Tuesday, prompting protest marches by the BJP’s Yuva Morcha against the same.

Tensions prevailed in some areas of Kerala including the state capital where police had to use water cannons and tear gas to disperse Yuva Morcha protestors.

Yuva Morcha activists also gathered at Poojappura in Thiruvananthapuram where the documentary was screened.

More screenings took place in some colleges in Ernakulam and Thiruvananthapuram on Tuesday evening.

However, support came in for the BJP from unexpected quarters as senior Congress leader and former Kerala CM AK Antony’s son, Anil, voiced displeasure against the documentary.

Protest marches were taken out by Yuva Morcha to the Victoria College in Palakkad and Government Law College in Ernakulam where SFI followed through with its announcement to screen the documentary.

In both places, police intervened to remove the protestors and prevent any conflict.

DYFI, the youth wing of the ruling CPI(M) in Kerala, said it will screen the documentary not just in the southern state, but across India.

It has to be shown to the public irrespective of the attempts by the Union government to hide it, V K Sanoj, state secretary of the DYFI told reporters.

He said there was nothing “anti-national” about screening the documentary as it has not been banned.

DYFI has no interest in creating any atmosphere of conflict in the state or the country, Sanoj added.

CPI(M) too came out in support of screening of the documentary with its state secretary M V Govindan saying that people should protest against the ban on screening it.

He said views should not be banned and doing so would only attract more attention to them.

Senior Congress leader Ramesh Chennithala, expressed a similar view, when he said that blocking screening of the documentary was undemocratic and an infringement of the freedom of expression.

He further said that no matter how much the central government may try to hide it, it cannot be covered up.

Meanwhile, former chief minister Antony’s son Anil, in apparent support to BJP in the ongoing political storm in the state, said placing the views of the British broadcaster over Indian institutions would “undermine” the country’s sovereignty.

“Despite large differences with BJP, I think those (in India) placing views of BBC, a state sponsored channel with a long history of (alleged India) prejudices, and of Jack Straw, the brain behind the Iraq war, over (Indian) institutions is setting a dangerous precedence, will undermine our sovereignty,” Anil Antony, who had handled the digital communications of the grand old party’s Kerala unit till recently, tweeted. Straw was the then British foreign secretary in 2002.

Earlier in the day, various political groups in Kerala announced they would screen the documentary, prompting the BJP to urge Chief Minister Pinarayi Vijayan to intervene and put a stop to such endeavours.

Subsequently, SFI — a pro-Left student organisation allied with the CPI(M) — and various wings of Kerala Pradesh Congress Committee (KPCC), including the Youth Congress, announced they would screen the documentary in the state.

The Kerala Pradesh Congress Committee’s (KPCC) minority cell also said that the documentary would be screened in all district headquarters of the state on Republic Day.

BJP termed such move as “treasonous” and asked the Kerala CM to urgently intervene and nip such endeavours in the bud.

BJP state president K Surendran filed a complaint with Vijayan demanding that permission be not given to screen the documentary in the state.

In his complaint, Surendran said the screening of the documentary would tantamount to condoning foreign moves to endanger the country’s unity and integrity.

He also said that re-living the unfortunate events of two decades ago was aimed at “fueling religious tensions”.

Union Minister of State for External Affairs and Parliamentary Affairs V Muraleedharan also urged the CM not to allow screening of the documentary and sought his urgent intervention in the matter.

In a Facebook post, Muraleedharan said that re-introduction of allegations rejected by the Supreme Court questions the credibility of the highest court of the country.

Both Muraleedharan and Surendran have dubbed the screening of the documentary as “treason”.

SFI, in a Facebook post earlier in the day, said the documentary would be screened in various college campuses in the state.

State Youth Congress president Shafi Parambil, in a social media post, said the reminders of betrayal and genocide cannot be hidden by power and the BBC documentary will be screened in Kerala.

KPCC minority cell chairman, advocate Shihabuddin Karyat, in a statement said the documentary would be screened in district headquarters of the party on Republic Day in view of the undeclared ban on it in the country.

The Centre had last week directed blocking of multiple YouTube videos and Twitter posts sharing links to the documentary.

The two-part BBC documentary, which claims it investigated certain aspects relating to the 2002 Gujarat riots when Prime Minister Narendra Modi was the chief minister of that state, has been trashed by the Ministry of External Affairs as a “propaganda piece” that lacked objectivity and reflected a “colonial mindset”.

The directions on blocking access were understood to have been issued by the Ministry of Information and Broadcasting on Friday using the emergency powers under the IT Rules, 2021.

The central government’s move has received sharp criticism from opposition parties like the Congress and the TMC for imposing “censorship”.

At the same time a group of 302 former judges, ex-bureaucrats and veterans have slammed the BBC documentary as a “motivated charge sheet against our leader, a fellow Indian and a patriot” and a reflection of “dyed-in-the-wool negativity and unrelenting prejudice”. PTI HMP SS SS