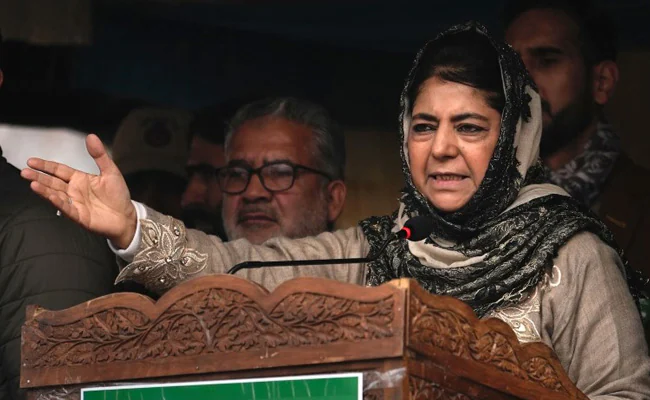 In a letter to Chief Justice of India D Y Chandrachud, she also alleged that the trust deficit and growing alienation has only widened in Jammu and Kashmir since the scrapping of Article 370 in 2019.

Mehbooba Mufti said the fundamental rights “are being brazenly impinged upon”. (File photo)

Basic rights in the country have now become “luxuries” and “entitlements” bestowed upon only those who toe the government’s line on political, social and religious matters, former Jammu and Kashmir chief minister Mehbooba Mufti said on Saturday.

In a letter to Chief Justice of India D Y Chandrachud, she also alleged that the trust deficit and growing alienation has only widened in Jammu and Kashmir since the scrapping of Article 370 in 2019.

“I write to you with a deep sense of concern and worry about the prevailing situation in the country especially J-K. Your recent observations on the inability of lower judiciary to grant bail in ordinary cases in a functioning democracy as ours should have been adopted as a directive rather than just being consigned to a single column story churned out in newspapers,” Ms Mufti said in the letter posted on her Twitter handle.

Speaking at the inauguration of the Andhra Pradesh Judicial Academy on Friday, CJI Chandrachud had said that over 63 lakh cases across the country have been considered to be delayed due to non-availability of counsel and over 14 lakh cases are delayed as they await some kind of document or record.

He had said that people must get rid of the colonial mindset of referring to and treating district courts as subordinate judiciary in hierarchy and in practice.

Ms Mufti, the PDP president, said the fundamental rights enshrined in the Indian constitution and guaranteed to all Indian citizens “are being brazenly impinged upon”.

“Unfortunately, it is these basic rights that have now become luxuries and entitlements bestowed upon only those select citizens who toe the Government’s line on political, social and religious matters.

“And more worryingly, to those who actively contribute and not obstruct GOI’s idea of an India where its strengths of diversity, religious pluralism and tolerance must be weeded out and crushed to lay the foundations of a one religion nation where minorities are relegated to the social, political and economic fringes,” she said.

The Peoples Democratic Party (PDP) leader further alleged that since 2019, the fundamental rights of every resident of Jammu and Kashmir have been suspended arbitrarily and the constitutional guarantees given at the time of its accession were suddenly and unconstitutionally abrogated.

She said hundreds of youngsters are languishing in jails outside the Union territory as undertrials and their condition is exacerbated since they belong to poor families who lack the wherewithal to get legal aid.

“All this is happening at a time when the trust deficit and growing alienation has only widened since 2019. Passports being a fundamental right are impounded with full impunity. Journalists are being jailed and even prevented from flying out of country,” she said.

While Mehbooba Mufti said the only ember of hope in these “bleak circumstances” is the judiciary which only can right these “wrongs”, she added, “however, it saddens me to say that so far our experience with the judiciary has not inspired much confidence”.

She said it took the Supreme Court well over a year to order her release after she was detained under the Public Safety Act (PSA) in 2019.

She, however, expressed hope that with the CJI’s intervention, justice is delivered and the people of J-K see their expectations of dignity, human rights, constitutional guarantees and a democratic polity realised which had inspired their forefathers to join Mahatama Gandhi’s India.