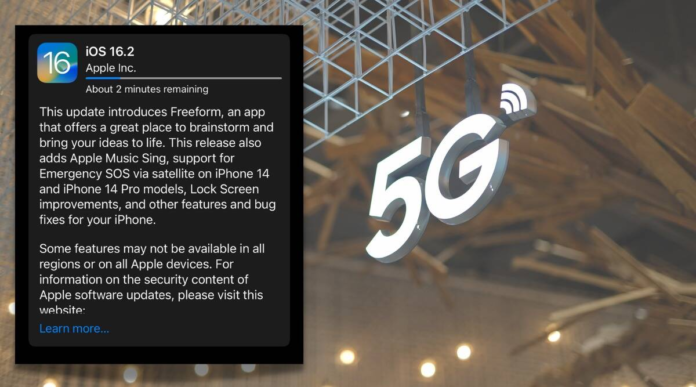 After the Indian government pushed Apple and other smartphone players to start enabling 5G services on their services, the Cupertino-based tech giant had promised to rollout the update by December.

Apple users in India will be able to avail 5G services in India from today with the iOS 16.2 being rolled out with the software required to access the next generation networks in India. Apple has made the public beta update of the same available for testing a month for select users.  Interestingly, despite the update an iPhone 14 Pro Max on the Airtel network showed the 5G software was still not available. However, after the update users will be able to see the 5G options in network settings.

With the Beta update, Apple had hoped to collect feedback about the network proficiency and resolve issues before the final software update to all users. 5G promises to give users access to faster download speeds and low latency and with it new new use cases like cloud gaming.

After the Indian government pushed Apple and other smartphone players to start enabling 5G services on their services, the Cupertino-based tech giant had promised to rollout the update by December. The Beta update was rolled out in early November. Other major smartphone makers, like OnePlus and Motorola have started rolling out 5G updates in a phased manner. Prime Minister Narendra Modi launched 5G services in India on October 1 with network providers enabling the service in top cities soon after.

The update also brings a number of other new features to iOS. This includes a new Freeform, which can act as a whiteboard where users can collaborate with others and let them edit the files as well. Apple Music is getting a new ‘Sing’ feature which will let users sing along to their favourite songs. Apple calls it ‘beat-by-beat’ lyrics that will make Karaoke easier when relying on Apple Music.

Apple is also bringing end-to-end encryption to more iCloud backup categories, including Notes, Photos, etc. Users can also now hide their wallpaper or notifications on the Lock Screen when Always-On Display is enabled on the iPhone 14 Pro variants.

It also brings improved search in Messages allows users to search for photos by searching for the content in them – like a dog, car, person, or simply actual text in a picture.